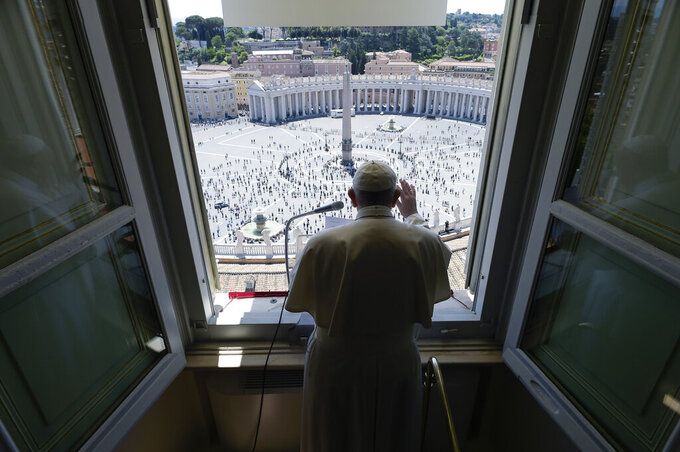 Pope Francis delivers his blessing from his studio window overlooking St. Peter's Square at the Vatican, Sunday, May 31, 2020. Francis celebrated a Pentecost Mass in St. Peter's Basilica on Sunday, albeit without members of the public in attendance. He will then went to his studio window to recite his blessing at noon to the crowds below. The Vatican says police will ensure the faithful gathered in the piazza keep an appropriate distance apart. (Vatican News via AP)

The Vatican is centralizing its contracting and procurement procedures in a bid to cut waste, root out corruption and bring the Holy See’s finances into the 21st century.

Pope Francis approved new norms governing contract bids and purchasing in his latest effort to reform the Vatican’s finances, which have grown even more precarious amid the coronavirus pandemic and closure of the Holy See’s main cash cow, the Vatican Museums.

The Museums reopened Monday for the first time since March. But the main source of revenue for the Holy See is looking at a significant shortfall this year given the collapse of the tourism industry that provides a steady flow of visitors to the Sistine Chapel.

The reform comes as the Holy See is facing an embarrassing financial scandal involving a 150 million-euro investment in a London real estate venture that involved a host of shady characters who allegedly fleeced the pope of millions of euros.

The new procurement reforms don’t address how the Holy See invests its assets. But they do make clear that the Vatican from now will be a bit more selective in the contractors and companies with whom it does business.

The new code calls for a centralized list of businesses that can bid for Vatican contracts, and lists the criteria of those that can be excluded: any company or individual in bankruptcy proceedings or under investigation or convicted of crimes such as fraud, mafia ties, tax evasion or corruption.

It also imposes norms to avoid conflicts of interest both among Vatican officials awarding contracts and in the companies bidding for them. It calls for transparency in the procedures and lays out how contested bids and contracts can be adjudicated in the Vatican criminal tribunal.

The Vatican’s out-of-control spending first came to light during the 2012 VatiLeaks scandal, when leaked internal documents revealed that the Vatican City State had paid 550,000 euro for its 2009 life-sized Christmas Nativity scene in St. Peter’s Square.

Since then, the Vatican has relied on donated or lower-cost Christmas scenes.

But spending and contracting has long been disorganized, with each Vatican congregation going its own way to find contractors without any organized competitive bidding procedures that would be expected for a public administration.

Even before the virus and resulting global economic slowdown, the Vatican was looking at a multi-million euro deficit for the foreseeable future, though officials denied it was at risk of default this year.