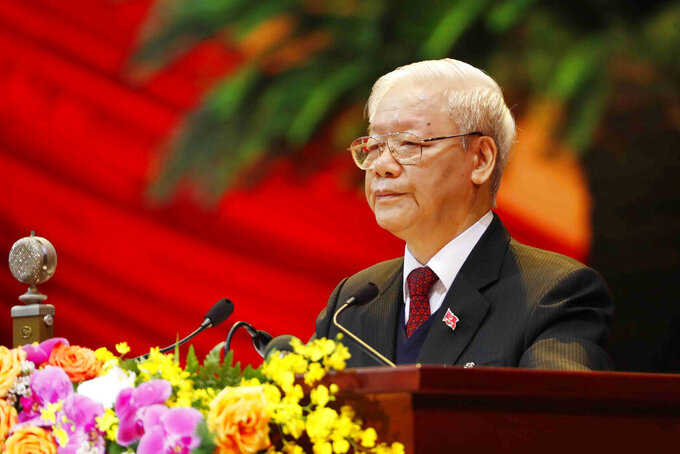 Vietnam Communist Party General Secretary Nguyen Phu Trong delivers a speech during the opening of 13th Communist Party Congress in Hanoi, Vietnam on Tuesday, Jan. 26, 2021. Vietnam's ruling Communist Party has begun a crucial weeklong meeting in the capital Hanoi to set the nation's path for the next five years and appoint the country's top leaders. (An Van Dang/VNA via AP)

HANOI, Vietnam (AP) — Senior members of Vietnam’s ruling Communist Party cautioned Tuesday that their country faced opportunities and challenges ahead, as they began a key meeting to set the nation’s path for the next five years.

Prime Minister Nguyen Xuan Phuc cited climate change, natural disasters and diseases as among the challenges ahead in his speech before the 13th National Party Congress and aired on state television.

“Globalization and global integration are on the right track, but they are met with the rise of extreme nationalism, strategic competition and trade wars," declared Communist Party General Secretary Nguyen Phu Trong, the nation’s most powerful leader.

Vietnam has recorded only 1,548 confirmed cases and 35 deaths from COVID-19, making it one of the world's few success stories in containing the virus and as a result, saw its economy expand last year.

The 1,587 party members attending the congress this week will also be deciding the country’s top leaders. The delegates will elect 200 members to the Central Committee, which will choose members of the Politburo, the highest party body. The Politburo will then nominate for general secretary, president, prime minister and National Assembly chairman, and the congress delegates will vote on the nominations.

Conventional wisdom holds that Trong, 76, who has waged a much-needed fight against corruption, will be selected for a third five-year term as party general secretary.

Trong “appears to have been given a second special exemption from mandatory retirement at the age of 65,” Carlyle Thayer, emeritus professor of politics at Australia’s University of New South Wales, said in an email interview.

Thayer and other observers believe that Trong had favored a fellow Politburo member, Tran Quoc Vuong, to succeed him but sought to stay when his pick could not attract sufficient support from members of the Central Committee.

"The Party’s key challenge is to bring about a smooth leadership transition and introduce a slate of new capable leaders that will lead the country for the next five to 10 years,” said Le Hong Hiep, a Fellow in the Vietnam Studies Program at the ISEAS-Yusof Ishak Institute in Singapore.

If the age rules are changed for Trong and Phuc as a way to ensure continuity, he said, “This will lead to increasing unpredictability and instability in the Party’s succession politics in the coming years if the Party fails to restore these rules and norms afterwards.

“For the time being, however, perhaps the Party’s priority is to introduce an acceptable leadership structure that can help the Party maintain its unity and avoid a leadership crisis,” he suggested.

No changes in foreign policy are foreseen from the congress, with Hanoi’s major challenge continuing to be how to use its relations with the United States to counter China’s aggressive territorial claims in the South China Sea, which hinder Vietnam’s efforts to exploit offshore oil and gas.

“Regardless of who is selected for leadership, the most likely scenario is that Hanoi continues to balance,” said Derek Grossman, senior defense analyst at the California-based RAND Corporation think tank.

Human rights groups are urging Vietnam to cease its repressive activities towards critics, seen especially in its severe punishments of bloggers.

“Viet Nam has made some strides in helping to realize economic and social rights for many of its people, but this progress has been severely undermined by its continued repression of freedom of expression, association and peaceful assembly. ”

The Congress is set to conclude on Feb. 2.