Villa-Tottenham game off; Spurs to play Fulham instead 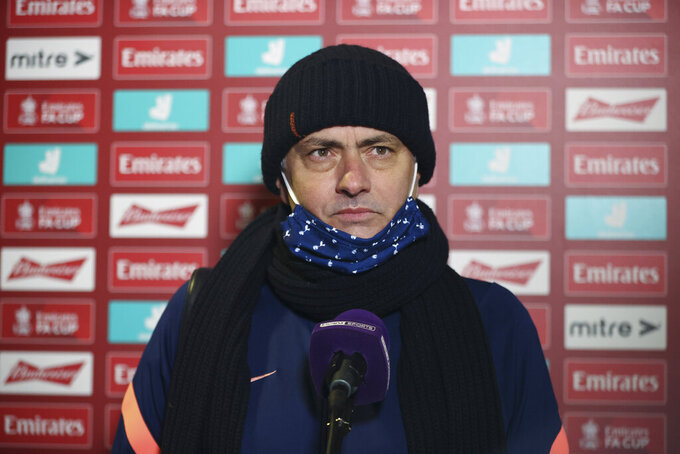 Tottenham's manager Jose Mourinho answers questions during an interview after his team's 5-0 win in the English FA Cup third round soccer match between Marine and Tottenham Hotspur at Rossett Park stadium in Crosby, Liverpool, Sunday, Jan. 10, 2021. (Clive Brunskill/Pool via AP)

LONDON (AP) — Tottenham’s Premier League game against Aston Villa on Wednesday has been postponed, with Jose Mourinho’s team instead facing Fulham on the same day.

Villa requested for its game against Tottenham to be rescheduled, the league said Monday, after a coronavirus outbreak at its training ground last week that led to 14 positive cases — 10 among players.

The Tottenham-Fulham game, originally scheduled for Dec. 30, was postponed following an outbreak of the virus in the Fulham squad.

Because Fulham is now playing against Tottenham in midweek, its match against Chelsea scheduled for Friday has now been pushed back to Saturday.