With virtual fans and daily matches, soccer returns to Spain 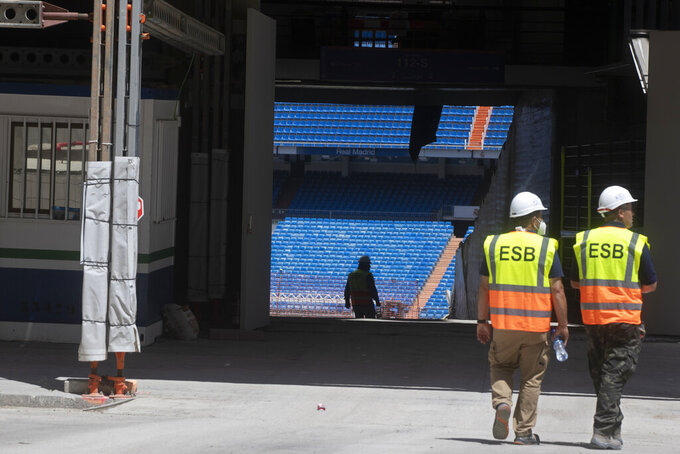 Workers walk into Real Madrid's Santiago Bernabeu stadium in Madrid, Spain, Monday, May 25, 2020. Spanish league clubs are now allowed to train with groups of up to 14 players as the league stays on track to restart in less than three weeks. (AP Photo/Paul White)

MADRID (AP) — With virtual crowds, daily matches and lots of testing for the coronavirus, soccer is coming back to Spain.

The Spanish league resumes this week more than three months after it was suspended because of the pandemic, becoming the second top league to restart in Europe. The Bundesliga was first. The Premier League and the Italian league should be next in the coming weeks.

The Spanish league will kickstart in empty stadiums on Thursday with the popular Seville derby between Sevilla and Real Betis, though the season will officially resume on Wednesday with the second half of a second-division game between Rayo Vallecano and Albacete, which was interrupted in December after Rayo fans called a Ukrainian player from Albacete a Nazi.

The title race will resume over the weekend with leader Barcelona visiting Mallorca on Saturday and second-place Real Madrid hosting Eibar on Sunday at its training center because the Santiago Bernabéu Stadium is undergoing renovations for the rest of the season.

Defending champion Barcelona has a two-point lead over Madrid with 11 rounds remaining.

The league expects to play matches every day until its conclusion on July 19, and all players and coaches will be tested before every game.

Virtual crowds and chants — similar to those in video games — will replace fans on the television broadcasts. Viewers will have the option of watching the matches with the empty stadiums or with the virtual fans in the stands.

Stadiums will be empty for now, but the league has not ruled out having fans back by the end of the season as Spain continues to successfully fight the pandemic. The government has been gradually lifting the lockdown restrictions put in place in March. The nation was one of the hardest hit by the pandemic, with nearly 28,000 COVID-19 deaths reported.

“I always believed that we would play again, despite of what many people said,” Spanish league president Javier Tebas said. “It was complicated, and our plan was to return when we could. It was difficult but we have succeeded. We spent three weeks saying that this would be impossible, and now we are even considering having fans back in the stands.”

There were early concerns among players about returning to action, with defender Fali Giménez of second-division club Cádiz threatening to quit rather than risk being infected, and with players from top-tier club Eibar releasing a statement saying they were afraid of practicing and playing during the pandemic.

The league established a strict return-to-training protocol that initially included daily testing of players and coaches. They will now be tested 48 hours before each match. There were a few positive cases when the training began, but the league has said nobody tested positive recently.

The league hasn’t communicated strict restrictions on goal celebrations and has so far appealed to players to use common sense and their judgement.

Only a few journalists will be allowed in matches because of health safety concerns.

The league estimated losses of 1 billion euros ($1.1 billion) had the competition not returned, and it said clubs still face losses of nearly 700 million euros ($791 million) all together. Nearly every club resorted to government furloughs to reduce players’ salaries and labor costs during the pandemic.

Barcelona may have benefited the most from the stoppage, as it was struggling when the league was suspended.

“The players came back extremely well,” Barcelona coach Quique Setién said. “The team will be fresher now than it was in March.”

The extra time without matches also allowed Barcelona striker Luis Suárez — who was expected to miss the rest of the season — to recover from a knee injury.

There had been some concern with Lionel Messi because of a minor muscle injury, but Setién said the playmaker is set to compete in Mallorca on Saturday.

Messi is the league’s leading scorer with 19 goals, five more than Real Madrid’s Karim Benzema. The Argentina star is trying to finish as the league’s top scorer for the seventh time, which would be the most all-time. He will also have a chance to surpass Pelé for the most goals with a single club. Messi has 627, which is 16 fewer than the 643 goals Pelé scored with Brazilian club Santos.

Real Madrid will also have the return of players who were not expected to be fit had the season not been suspended, including Marco Asensio and Eden Hazard.

Setién said it’s impossible to predict how the league will play out after the unusual circumstances that prompted its suspension, but the fact that it’s returning is already reason to celebrate.

“There was a moment when it didn’t look like we were going to play again. Talking to other coaches, we saw it very complicated," he said. "Now the situation is calmer, the perspective is different.”