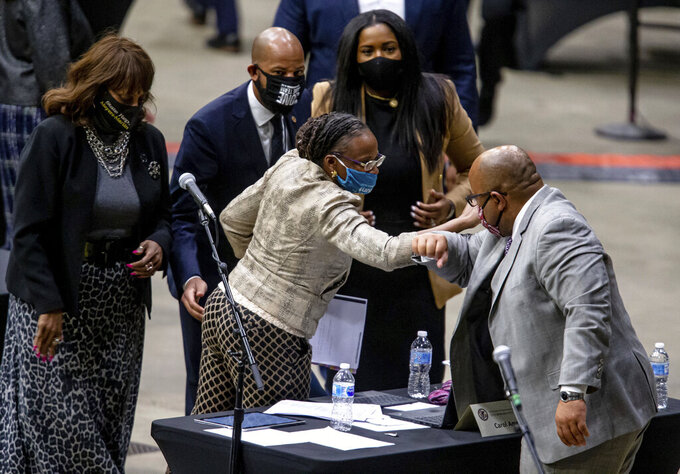 FILE - In this Monday, Jan. 11, 2021, file photo, state Reps. Carol Ammons, D-Urbana, and Andre Thapedi, D-Chicago, greet each other by bumping arms during a session of the Illinois House conducted at the Bank of Springfield Convention Center in Springfield, Ill. Both House and Senate said Tuesday they intend to continue work in their spring session with remote committee hearings conducted through video conference because of the ongoing pandemic. (Justin Fowler/The State Journal-Register via AP, File)

The Senate announced Tuesday that its members will convene in committees by video conference on the days it was scheduled to be in session this month, Feb. 9-11 and 16-18. The House had scheduled nine work days this month but has settled on only one in which members can arrange for remote work.

The pandemic has severely limited legislative action since early last March when transmission of the virus picked up speed, forcing the Legislature to cancel most of its time in Springfield. Faced with a May 31 scheduled adjournment, the Legislature met for four days in late May to adopt a budget for the fiscal year that began July 1.

The brief meeting also generated legislation in the Senate to allow for lawmakers to work remotely, but it failed to get support in the House. The Senate then adopted a rule permitting virtual meetings.

“The early part of any new session is dominated by committee action,” said John Patterson, spokesman for Senate President Don Harmon, an Oak Park Democrat. “Given the ongoing pandemic, it makes sense to utilize the Senate’s remote committee meeting authority to continue doing the work of the people.”

Video of committee action will be available on the Illinois General Assembly's website.

There was no immediate response from Gov. J.B. Pritzker's office about how he will handle the annual State of the State address and his presentation of an annual budget, each typically given on separate dates to joint sessions of the General Assembly, but both scheduled this year for Feb. 17.

The House, whose calendar initially included work days this week as well as during the next two, will meet Feb. 10 to adopt rules for the new, two-year session which began last month. House Speaker Emanuel “Chris” Welch, a Hillside Democrat, plans to include a rule that allows for remote legislating, said his spokesman, Sean Anderson.

That action will take place in the House chamber of the Capitol. But access to the floor will be limited, with representatives rotating in and out to cast votes, Anderson said.

Recent work by the House — last May and in early January — occurred at the downtown Bank of Springfield Convention Center, which allowed members to spread out and reduce the chance of spreading the virus.

Renting the convention center for those 11 days cost the House about $330,000, a cost for which the state will seek reimbursement from the federal government for COVID-19 related expenses, Anderson said.

No other House dates will be scheduled until there's approval for virtual sessions, Anderson said.