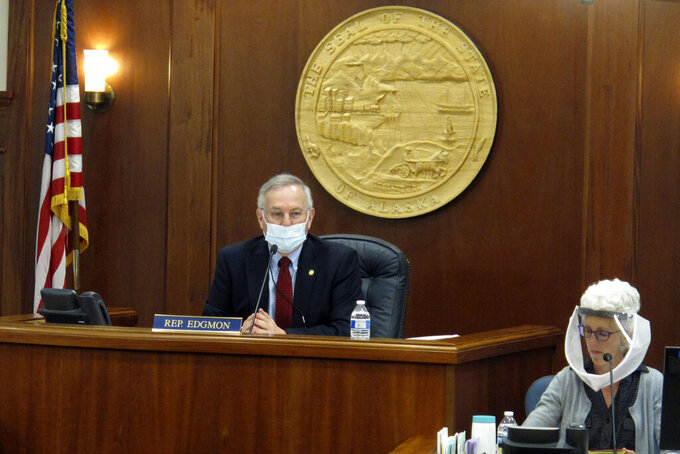 FILE - In this May 19, 2020, file photo, Alaska House Speaker Bryce Edgmon, left, presides over the House floor in Juneau, Alaska. Alaska lawmakers who each year relocate to a capital city accessible only by plane or boat are facing challenges in getting settled ahead of what is expected to be a difficult legislative session overshadowed by COVID-19. Speaker Edgmon, an independent from Dillingham, about 860 miles from Juneau, said pandemic concerns come at a time when lawmakers will need to make tough budget decisions. (AP Photo/Becky Bohrer, File)

JUNEAU, Alaska (AP) — Alaska lawmakers who each year relocate to a capital city accessible only by plane or boat are facing challenges in getting settled ahead of what is expected to be a difficult legislative session overshadowed by COVID-19.

The Baranof Hotel, a 1939 art deco showpiece in downtown Juneau with about 200 guest rooms, laundry service and a restaurant just blocks from the Capitol, is closed through the winter due to the pandemic.

Short-term housing rental offerings have been sluggish compared to last year, officials say, though they expect more places to become available as the session approaches and plenty of hotel options, as many events have been waylaid by the virus.

Still, with just over a month before session is set to begin, some lawmakers are waiting to lock down digs. One factor: uncertainty about how — and for how long — lawmakers plan to meet.

“If I need to, I'll sleep in my office,” Sen. Scott Kawasaki, a Fairbanks Democrat, said with a laugh.

For years, he has shared a place with a fellow lawmaker. But he said the place they had last session is booked, and he was wary about signing a contract on a fallback option if lawmakers end up deciding to take an extended recess, as they did earlier this year.

Lawmakers would first have to meet in person if they wanted to change their rules to allow, for example, remote voting, said Jessica Geary, executive director of the Legislative Affairs Agency.

Kawasaki also wasn't sure about bringing a car. Such a journey for lawmakers and staff on Alaska's limited road system can involve crossing into Canada and driving across often brutally cold, treacherous landscapes to reach a ferry to get to Juneau.

Nonessential travel through Canada is restricted but Geary said a special arrangement with the Canadian Consulate allows legislators and staff passage on their way to Juneau.

Planning for how long to be in Juneau in recent years — outside the pandemic — has been a crapshoot, with lawmakers, facing ongoing budget deficits, often requiring special sessions beyond their constitutionally allowed four-month regular sessions.

In some cases, as the work dragged on, lawmakers had to scramble for alternative lodging as their leases expired and as Juneau's tourist season began.

This year was different: Faced with the coronavirus threat, lawmakers passed a budget early, in late March, before taking an extended break. During part of the recess, they were automatically approved to claim a daily $287 allowance that some said helped pay lease and storage obligations.

Not all lawmakers took the allowance or took it for the full allowable period. The Legislature met again briefly in May before adjourning.

While there was an expectation lawmakers would return to consider Republican Gov. Mike Dunleavy’s appointments to boards and commissions and weigh an extended disaster declaration related to the pandemic, that never happened.

Legislative leaders have said they lacked the votes needed for lawmakers to call themselves into a special session, and they raised concern with Dunleavy unilaterally issuing a new declaration.

House Speaker Bryce Edgmon, an independent from Dillingham, about 860 miles (1,380 kilometers) from Juneau, said pandemic concerns come at a time when lawmakers will need to make tough budget decisions.

“I’m fairly anxious as to what this upcoming session could bring, on a number of fronts,” he said.

Rep. Mike Prax, a North Pole Republican who stayed at the Baranof during this year's session, called its temporary closure a “bummer.” He said he doesn't want to bring a car and hopes to find a place within walking distance to the Capitol. Several hotels are within a mile (1.6 kilometers).

Lawmakers in other states are wrestling with how to conduct their upcoming sessions. In Washington, lawmakers plan a mix of virtual meetings and on-site votes. In New Mexico, lawmakers are debating a potential delay to the start of session in January or holding proceedings at a convention center with space to spread out.

In Alaska, a council that handles legislative business during the interim approved a contract for screening and testing at the Capitol for the upcoming session and proposed a code of conduct that includes testing before or upon arrival in Juneau and avoiding non-essential trips from the city. Geary said the next Legislature can decide whether to follow or change the policies.

He also said Juneau has good testing capacity and that residents have been good about wearing masks, keeping their distance and avoiding large groups.

Sen. Donny Olson, a Democrat, usually brings his wife and six children with him for session from the tiny community of Golovin, about 1,000 miles (1,609 kilometers) from Juneau.

He said finding a comfortable place with room for the kids to play is a factor as he and his wife weigh whether he should come alone, as is schooling. He said his children have had in-classroom instruction in Golovin. Juneau schools recently announced plans to resume in-person classes in January.

Olson, who is a doctor, said he was concerned some might not cooperate with the proposed protocols at the Capitol meant to guard against the virus.

“And because of that, trying to go ahead and safeguard myself and my children against the COVID is something that is high on my priority list,” he said.