VIRUS DIARY: Kept inside for weeks, triplets emerge in Spain 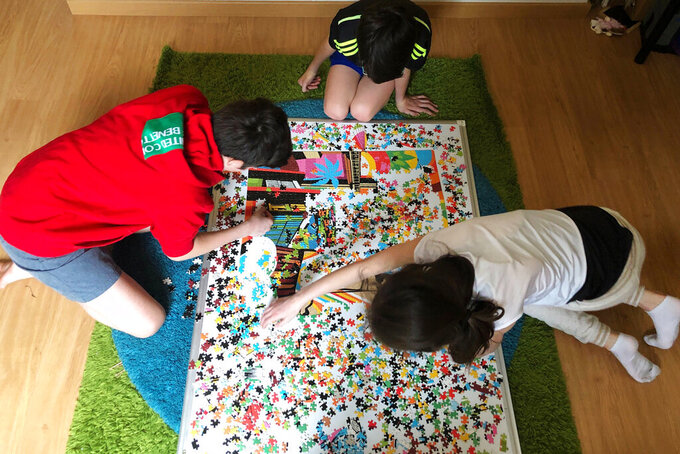 In this April 22, 2020, photo, triplets, from left, Diego, Caio and Laís try to put together a puzzle in their apartment in Madrid. The 12-year-old triplets will be stepping out of their three-bedroom apartment for the first time in 44 days on Sunday. (AP Photo/Tales Azzoni)

MADRID (AP) — It will be only an hour. It will probably feel like a lot longer.

On Sunday, for the first time in nearly six weeks, my 12-year-old triplets will step out of our three-bedroom apartment in Madrid.

They will enjoy their first 60 minutes of freedom after 44 days of complete confinement because of the coronavirus pandemic. They had not been allowed out the door since the Spanish government declared a state of emergency in mid-March and implemented strict lockdown measures.

Spain was one of the few countries where children had been prohibited from going out at all times during the lockdown. But things changed last weekend when the government, under pressure, announced that kids under 14 would be allowed to leave confinement for an hour every day accompanied by a parent and within a kilometer (0.6 mile) from home.

The announcement calls for a celebration — both personal and in the larger sense.

Not only does it mean a glimpse of freedom for our kids, it is also a sign that things are improving in Spain following weeks of dispiriting virus news and thousands of deaths that forced local authorities to transform an ice rink and other facilities into temporary morgues.

The last time my two boys and my daughter stepped out of the apartment was March 13, the day before the lockdown was announced. We went to a Brazilian restaurant the kids love. Schools had already closed, and it felt like vacation at the time. But the trip to the Brazilian restaurant turned out to be their last one.

One day, my daughter, Laís, almost accompanied my wife to the grocery store. But seeing her with gloves and a mask was too much. At the last minute, my wife and I looked at each other and decided it wasn’t worth it. We had considered allowing them to go to the bakery across the street to buy bread but gave up on that idea, too.

There was the risk of infection and the chance they would be stopped by police, who have handed out more than half a million fines to those who disobeyed lockdown measures. It really caught my attention when I heard that police even threatened to fine Real Madrid star Luka Modric after his son went out to pick up a ball that bounced into the street.

We faced a similar situation. One of my son’s flip-flops flew over the balcony and into the street six floors below while he played soccer on a terrace that proved way too small for that. I rescued the flip-flop, avoiding a fine.

The same kid who sent the flip-flop over the balcony, Diego, almost had to make an unwanted trip out of the apartment when he stepped onto a plug adapter while playing with his brother Caio, opening a gash on his foot. Thankfully it wasn’t serious enough to require a trip to the ER.

The thought of having three preteens in the apartment 24/7 was daunting at first. Yet it didn't turn out too badly.

Having triplets helped more than hurt. They share similar interests and can entertain themselves. They finished a few TV series together, including “Stranger Things,” and at times they even cooked together for the whole family. Pizzas, omelettes and cakes were their specialties.

They are old enough to do fine alone with a tablet or a book, and they've handled virtual school activities well. But come Sunday, nothing will beat the few minutes of fresh air they will finally get to enjoy — even if that takes time away from the 2,000-piece puzzle that they promised to complete by the end of the confinement.

“ Virus Diary ” is an occasional feature showcasing the coronavirus saga through the eyes of Associated Press journalists around the world. Follow Tales Azzoni, AP’s sports writer in Madrid, on Twitter at http://twitter.com/tazzoni