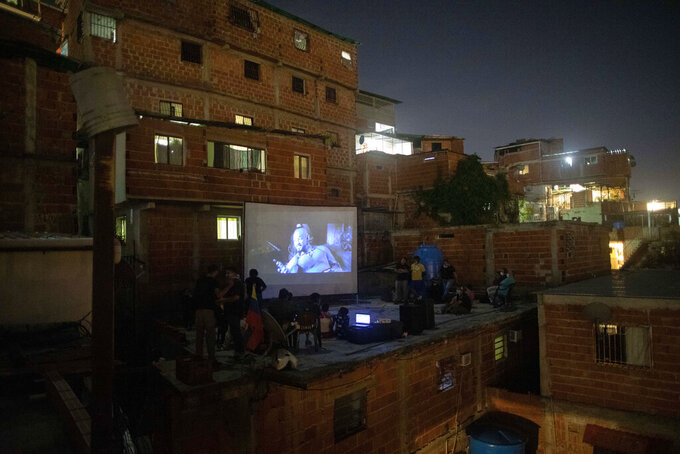 The film Aladdin is projected on a screen set up on the roof of a home in the Petare neighborhood of Caracas, Venezuela, late Monday, June 1, 2020. A neighborhood group called The Download Zone set up the movie as a free entertainment option for families cooped up since mid-March under the COVID-19 quarantine. (AP Photo/Ariana Cubillos)

CARACAS, Venezuela (AP) — President Nicolás Maduro and Venezuela's opposition, led by Juan Guaidó, have agreed to a measures for battling the new coronavirus to be overseen by international health workers, a first step in years toward cooperation between bitter political rivals for the benefit of the country.

While focused narrowly on the pandemic response, experts said Wednesday the agreement opens a window of hope for tackling Venezuela's overarching political stalemate that has left the once-wealthy oil nation in deepening economic and social crisis.

Geoff Ramsey of the Washington Office on Latin America think tank said it's the first major agreement successfully forged in recent years between Maduro and the opposition.

“It’s hard to overstate how important this is for Venezuela,” Ramsey said.

Venezuelans are increasingly losing patience with the lack of progress in finding a political solution, he said, adding that this agreement could next lead to more badly needed humanitarian assistance and create momentum for negotiations for a political solution to the crisis.

“If they can negotiate a humanitarian accord, the next step would be to negotiate conditions for free and fair elections,” Ramsey said. “It seems like both Maduro and the opposition are beginning to see that they can’t simply sit back with their arms folded and blame the other side.”

The one-page agreement signed June 1 says both sides will work in coordination to find funds for fighting the coronavirus. It is signed by Maduro's health minister, Dr. Carlos Alvarado, and Dr. Julio Castro, who represents the Guaidó-led National Assembly.

“This document is, I hope, a step to move forward to a level of collaboration of both sides,” Dr. De Cosio told The Associated Press. “This is one milestone of many more to be reached.”

Venezuela has been in a political crisis for years, and early last year Guaidó claimed presidential powers as head of the National Assembly, backed by the U.S. among nearly 60 nations, which say Maduro holds power illegally due to an undemocratic election.

The crisis had left much of Venezuela without reliable water, electricity, gasoline and health care long before the pandemic. So far, officials report 1,819 coronavirus cases and 18 deaths, but some fear it could easily overwhelm Venezuela’s hospitals.

This new agreement most immediately could influence a divisive debate inside the opposition over whether to participate in legislative elections expected later this year. Some sectors of the opposition have been seeking an agreement with Maduro to overhaul the electoral council and allow international observers, among other conditions.

While the coronavirus agreement raised hopes of more to come, Maduro’s government and the opposition have repeatedly agreed in recent years to hold negotiations, but each time they ended in failure without advances.

U.N. Secretary-General Antonio Guterres welcomed the announcement of an agreement and encouraged the parties “to implement this agreement in accordance with the humanitarian principles of humanity, neutrality, impartiality and independence,” U.N. spokesman Stephane Dujarric said.

The U.N. chief also urged them “to build on this foundation to continue seeking common ground to overcome the country’s protracted crisis,” Dujarric said.

Guaidó’s opposition coalition said that the agreement is the result of “several months of struggle" and allows the World Health Organizations agency to receive the funds approved for humanitarian aid without it going to enrich a few in power or to be used as political blackmail.

Opposition lawmaker Miguel Pizarro, who represents the National Assembly's humanitarian efforts in Washington, said this was not an agreement with the Maduro government or the beginning of political negotiations with it. Rather, it sets basic terms for a humanitarian response to reduce suffering and death among Venezuelans, he said.

“Without a doubt, it is an important step," Pizarro said.

While Maduro jubilantly announces arrivals of medical supplies from allies such as China and Russia, he has consistently rejected U.S. offers of humanitarian aid, calling them an underhanded attempt to destabilize his rule. The opposition has been similarly reluctant to work with Maduro officials to distribute the aid that has trickled in from the International Committee of the Red Cross, the Roman Catholic Church and other sources, seeing it as a tool of coercion.

But over the past year, as efforts to unseat Maduro have stalled and social conditions have worsened, the opposition has quietly eased its objections to working through the socialist government in the belief that regular Venezuelans will benefit and to prepare for eventually assuming power itself one day.

Maduro's vice president of communications, Jorge Rodriguez, in a Tuesday night state TV address read the agreement aloud while holding it up as a willingness by the government to work with the opposition.

“Let’s set politics aside and talk about fighting the coronavirus,” he said. “This is a good start to work that we can deepen to combat COVID-19 together.”