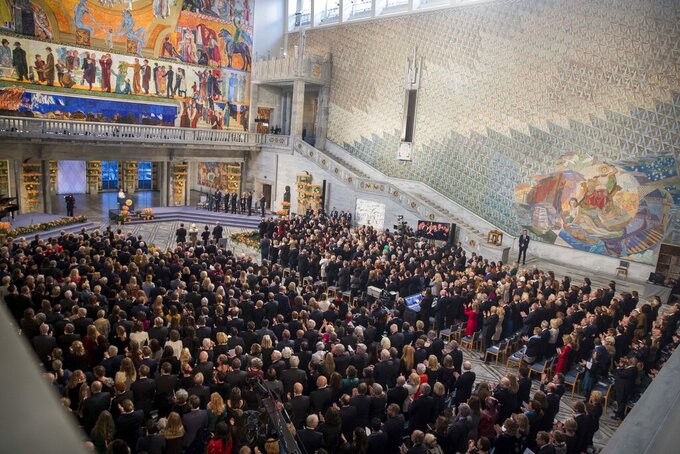 FILE - In this Monday Dec. 10, 2018 file photo, guests attend the Nobel Peace Prize Ceremony in Oslo Town Hall, Oslo. Dr. Denis Mukwege from Congo and Nadia Murad from Iraq will jointly receive the Nobel Peace Prize for their efforts to end the use of sexual violence as a weapon of war and armed conflict. The award ceremony for the 2020 Nobel Peace Prize, traditionally held at the Oslo city hall on Dec. 10, will instead be held in scaled-down form at the city’s university because of the coronavirus outbreak. (Berit Roald/NTB Scanpix via AP, File)

COPENHAGEN, Denmark (AP) — The award ceremony for the 2020 Nobel Peace Prize, traditionally held at the Oslo city hall on Dec. 10, will instead be held in scaled-down form at the city’s university because of the coronavirus outbreak.

“It is a strange and challenging year in many ways. We experience the same thing as many others, namely that things must be done in a new way,” Olav Njoelstad, the director of the Norwegian Nobel Institute, the body that oversees the Nobel Peace Prize, told Norway broadcaster NRK on Tuesday.

Ceremonies for the other prizes — physics, chemistry, physiology or medicine and literature as well as the economic prize — will be awarded in Stockholm, Sweden, on the same day. Organizers also have scheduled smaller ceremonies because of the pandemic.

From 1947 to 1990, the setting for the peace prize was the auditorium of the University of Oslo. Thirty years ago, the event moved to the city hall that could seat roughly 1,000 guests, among them Norwegian royals. This year, 100 guests are planned.

The name of the 2020 Nobel Peace Prize winner will be revealed on Oct. 9, while the other prizes will be announced between Oct. 5 and Oct. 12. There are 318 nominations for the 2020 peace prize — 211 are individuals and 107 are organizations and groups.

The Nobel institution does not publish the names of the nominees for 50 years. However, those who nominate — a select group of people and organizations, including national lawmakers, heads of state and certain international institutions — can publicly announce their nominations. Among this year's nominees is Swedish teenage climate activist Greta Thunberg.

There is some uncertainty about whether winners will be able to travel to Sweden because of the pandemic, and a digital award ceremony is being considered.

“As the infection situation is now, I think it is most likely that the prize winner or winners cannot be physically present. That is what we are planning for,” Njoelstad told NRK.

“We are looking into the possibility of having a video link to a meeting room in the award winner’s home country. It may also be relevant to have a representative of the Nobel Committee present there to present the Peace Prize.”

In Sweden, instead of the usual festive prize ceremony at the Stockholm City Hall, recipients will appear in a televised broadcast with the presentations of the awards interspersed with elements from the award winners’ home countries, Lars Heikensten, the executive director of the Nobel Foundation, told Sweden's TT news agency.

“We tie everything together in a joint broadcast, with a studio in the City Hall. Each prize winner can be at the Swedish embassy or at their university, ” Heikensten was quoted as saying.

Recipients get a 9-million kronor ($1 million) cash award — which they share if several people get the same prize — a gold medal and a diploma.

The traditional banquet and concert held after the Nobel award ceremonies in both Oslo and Stockholm have been canceled.

The musical tribute in Oslo to the Nobel peace laureate was first held in 1994. It has drawn big names from the entertainment industry. Lionel Richie, Bon Jovi, Aretha Franklin and Mary J. Blige are among the performers who have hosted the event.