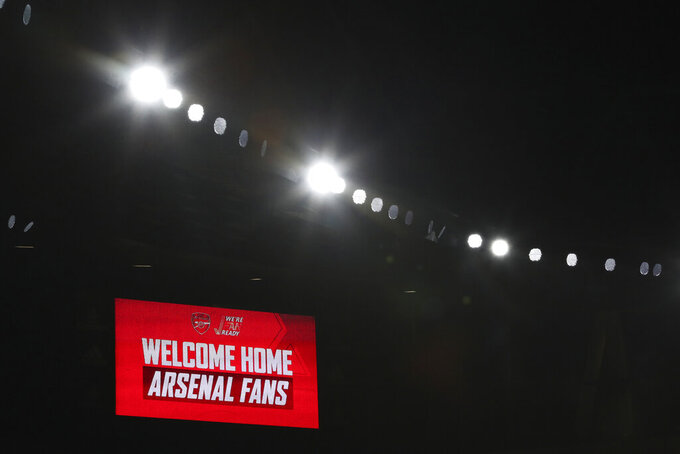 A sign welcomes a number of home fans allowed into an English Premier League soccer match between Arsenal and Burnley at the Emirates stadium in London, England, Sunday Dec. 13, 2020. (Catherine Ivill/Pool via AP)

LONDON (AP) — London's six Premier League clubs won't be allowed supporters at games again after the British capital was placed under the toughest level of coronavirus restrictions due to a spike in cases.

The decision by the British government, which takes effect on Wednesday, leaves only four top division clubs in areas where a maximum 2,000 fans are allowed in stadiums. They are Everton and Liverpool on the west coast, and Brighton and Southampton on the south coast.

Authorities in Manchester have been pushing for the northwest city to drop into the second tier of COVID-19 restrictions to allow the partial return of supporters for the first time since March.

Fans are being shut out of Arsenal, Chelsea, Crystal Palace, Fulham, Tottenham and West Ham only two weeks after they were allowed back, with London entering the third tier of restrictions.

"I’m slightly disappointed," Chelsea manager Frank Lampard said. "Even though we are in tier two and we’ve had fans in for a game already, I did feel that it should have been a level playing field for fans. If some clubs can have them and some can’t.

"We’ve seen, I think, already or felt it on the pitch, the backing that they give you and what it does to the game. I think that should be pretty level.”

It means, in the midweek round of Premier League matches, only the meeting of the top two on Wednesday is due to have a crowd when 2,000 fans are allowed to see champion Liverpool host leader Tottenham..