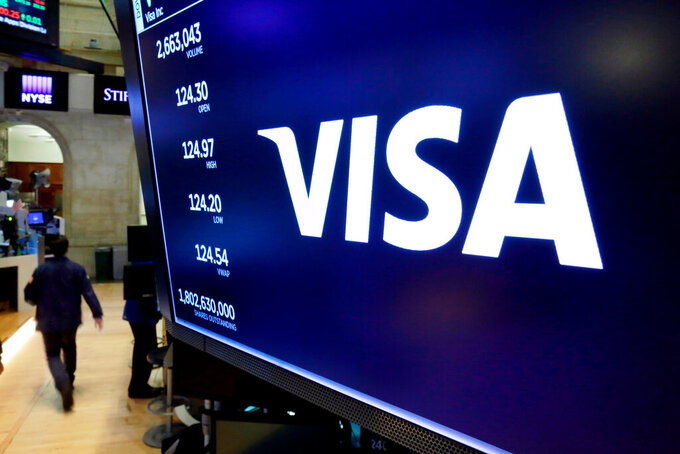 FILE- In this April 23, 2018, file photo, the logo for Visa appears above a trading post on the floor of the New York Stock Exchange. Visa Inc. said its fiscal third quarter profit fell by 23% from a year ago, undercut by the world’s consumers and businesses dramatically slowing their spending as the coronavirus pandemic took hold. (AP Photo/Richard Drew, File)

Visa said it earned a profit of $2.37 billion last quarter, down from $3.1 billion from a year earlier. On a per-share basis, the company earned $1.07 a share in the quarter in the latest quarter.

Visa’s business model — taking a small percentage of every transaction that runs on the Visa network — is highly susceptible to fluctuations in how consumers and businesses spend money. As economies shut down in March, April and May due to the pandemic, consumers spent less money on gas, eating out for lunch and dinner, movies or any other activities that required being outside.

That was a direct hit to Visa’s bottom line. Spending on Visa’s network worldwide was down 10% on a constant-dollar basis for the quarter ending June 30. The total number of transactions on the network was down 13% from a year earlier.

San Francisco-based Visa did say it was starting to see payment volumes tick up in the later part of the quarter, as many states reopened their economies to allow people to eat out at restaurants, go to bars, and shop again. However, those re-openings have in turn led to spikes in the number of coronavirus cases in the U.S., which has caused some states and cities to shut down parts of their economies again.

Because of this, Visa has declined to provide a full-year outlook for its profits for 2020, saying its “difficult to reasonably estimate” what the company’s fortunes will be in the coming months.