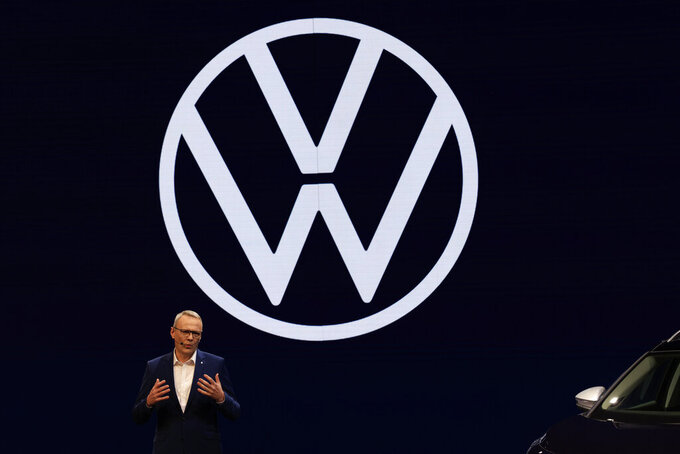 FILE - In this April 19, 2021 file photo, Stephan Wollenstein, CEO of Volkswagen Group China, speaks during a launch event at the Shanghai Auto Show in Shanghai, China. Volkswagen's earnings bounced back strongly in the first quarter. The company is riding the strong recovery from the pandemic in China, its single biggest market these days. (AP Photo/Ng Han Guan, File)

FRANKFURT, Germany (AP) — Volkswagen Group's after-tax profit rebounded strongly to 3.4 billion euros ($4.1 billion) in the first three months of the year as sales rebounded in China, the company's largest single market, and as customers went for the more profitable models in the company's lineup. Sales of electrified cars more than doubled.

The first-quarter profit figure improved from 517 million euros in the same period of 2020, when the pandemic caused dealerships and factories to close.

The Wolfsburg, Germany-based group raised its outlook for profitability for the year, saying operating returns on sales would reach 5.5% to 7.0%. The company said it expected sales to customers would be “significantly up” from the previous year, assuming successful containment of the COVID-19 pandemic.

The outlook was raised despite ongoing shortages of semi-conductors from suppliers that cost the company 100,000 vehicles in lost production in the first quarter. The shortage would “substantially burden” earnings in the second quarter, the company said.

CEO Herbert Diess said in a conference call with journalists that the company was limiting the impact of the shortage on earnings by steering scarce semiconductor supplies to vehicles that carry higher per-vehicle profits. Semiconductors are electronic components used for a wide range of functions including battery management, in-car entertainment and driver assistance and warning systems.

Chief Financial Officer Arno Antlitz said on the call that an expected strong second half would help make up for production lost earlier, saying the company saw "a good chance to recover the vehicles lost in the second half of the year.”

The company said Thursday its cash position improved to 29.6 billion euros, money it can use to invest in new technologies and drive its push into electric vehicles and transportation-related services. Sales of electric cars, both battery-only and battery-internal combustion hybrids, more than doubled in the first three months over the previous year period, to 133,000 vehicles. Overall, Volkswagen sold 2.4 million vehicles in the quarter, up 21%.

In addition to its namesake brand, Volkswagen Group includes luxury automakers Porsche and Audi, as well as SEAT and Skoda.