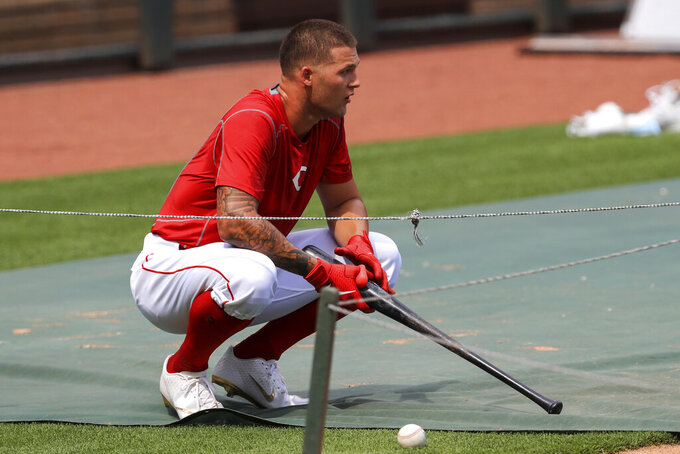 Looked and sounded like baseball, all right. Felt very different in many other ways.

The city that produced baseball's first professional team started getting ready for its first 60-game season Friday amid new precautions and fresh concerns about how the experiment would work.

The Cincinnati Reds held their first team workout since spring training was called off because of COVID-19 in March, trying to pull together again while keeping safely distant.

“It does not feel normal,” manager David Bell said Friday before the workout. “I wish it did. In a lot of ways, we feel prepared, for sure. But you’re kind of going into the great unknown. There’s some excitement to that. There’s some anxiety to it.”

The original 2020 schedule had the Reds in Arizona on Friday for the start of a series against the Diamondbacks. Instead, they were regrouping and trying to find a common starting point after more than three months apart.

The low-intensity workout was like most pregame ones during the season — batting practice, infield practice, stretching and running. A concern lingered over all of it.

Bell hadn't slept much the last few days because of the anxiety over the unique start, trying to get players ready in only three weeks for a less-than-half season while keeping them safe from a dangerous virus.

“There’s a healthy amount of anxiety — which there absolutely should be — about the seriousness of what we’re dealing with,” Bell said.

Virus precautions were the starting point. Before arriving at the ballpark, the Reds had an hour-long team Zoom meeting to go over protocols demonstrated in a video by Major League Baseball.

Two Reds players have tested positive for COVID-19 but the club isn't permitted to identify them or discuss their condition.

Players were reminded to wear masks in the clubhouse and other indoor settings. Players are spread throughout both the home and visitors' clubhouses at Great American Ball Park to create distancing.

“Inside the clubhouse it's significantly different than what we're used to, but once you get on the field we have the freedom to more or less do our job," Votto said. "The more time you spend outside, the more it has a regular season feel.”

Outfielder Nick Senzel wore a protective mask to his Zoom interview with the media and shared concerns about major league players staying safe when they go out in public.

“I'm definitely worried about that,” Senzel said. “A ton of professional baseball players when we have free time, sometimes you don't even think of what you're doing. Guys are going to have to be disciplined. This is a collective effort around the league to make sure everyone's doing their part to keep everyone safe and healthy.”

The adjustments will continue into the season. Among them: players won't be permitted to spit, lick their fingers to get a better grip on the ball, or have interactions with umpires. Votto noted they'll be required to break longstanding habits.

“These are things that just come natural to us, so I don't know how these things are going to be mitigated,” Votto said. “I don't know if they will.”