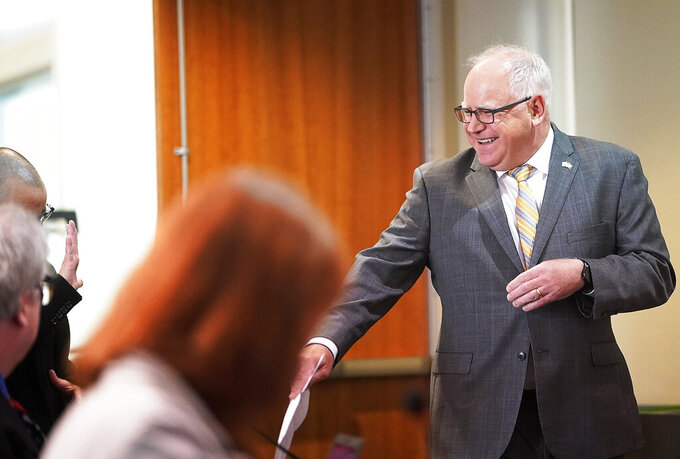 Minnesota Gov. Tim Walz is maskless but wore a big smile as he arrives for a press conference Monday, May 17, 2021, in St. Paul, Minn., to announce that he and the Legislature had agreed to spend $52 billion on the next two-year budget. (David Joles/Star Tribune via AP)

MINNEAPOLIS (AP) — Gov. Tim Walz sat down with top lawmakers Thursday to try to bring the divided Legislature closer to agreement on the budget bills that they were unable to finish before their regular session ended last month.

The Democratic governor told reporters that he’s hoping they can get the work done during a special session that he will call for Monday, which could last several days. Failure to complete the $52 billion, two-year budget would lead to at least a partial state government shutdown starting July 1. But he said the extra $1.8 billion that turned up in a fresh revenue forecast Thursday should help.

“Compromise and get the work done. We've had plenty of time,” Walz said.

The governor and legislative negotiators began their budget talks a few hours after the Capitol reopened to the public for the first time in over 400 days. The building was closed to the public as the pandemic took hold in March 2020 and lawmakers were forced to meet remotely. But Walz lifted most statewide coronavirus safety restrictions last month. And the fence that has surrounded the Capitol since last summer's unrest over the death of George Floyd came down last week.

Walz said he and his state agency heads would meet late into the day with Republican Senate Majority Leader Paul Gazelka, of East Gull Lake, Democratic House Speaker Melissa Hortman, of Brooklyn Park, and the lead negotiators for each of the 13 unresolved budget areas, starting with the health and human services, education and housing budget bills.

“We'll move down through the list and what we'll try and do is that the conference committees will bring in where their sticking points are, and we'll try and see if there's compromises to de-conflict some of those things and bring in a budget.”

The governor said he expects few policy changes because they've been the most contentious issues, but he said they're “very close” on budget numbers. He said the next budget will include about a $3.5 billion surplus and modest tax cuts for most Minnesotans. Some of the toughest issues have included an “off-ramp” for the state's eviction moratorium and Democratic proposals for police accountability. As the governor spoke, he was flanked by sign-waving people who support a GOP plan for taxpayer-funded private school options that Democrats oppose.

But Walz indicated that finishing the budget is his priority.

“I plan on working all weekend with them,” he said. “We should be able come in Monday and wrap this thing up. That would be my hope. We'll see, but that's up to the Legislature.”

Walz is required by law to call the special session for Monday as a condition for extending the emergency powers that he has used to direct the state's response to the pandemic. He called seven last year. Democrats have consistently blocked GOP proposals to end or roll back the governor's emergency authority, and it remains a partisan sore point.

But once lawmakers settle on how to end the eviction moratorium, he said, there will be only a few areas left where he still needs emergency powers, citing managing vaccinations and federal aid. So he said this special session could be “if not the final, one of the final times we need to do that."

That drew a sharp response from Republican House Minority Leader Kurt Daudt, of Crown, who accused the governor of abusing his emergency powers and using them as leverage to seek policy concessions.

"This has gone on long enough, and House Republicans will do everything in our power to end the emergency powers before the special session adjourns,” Daudt said in a statement.