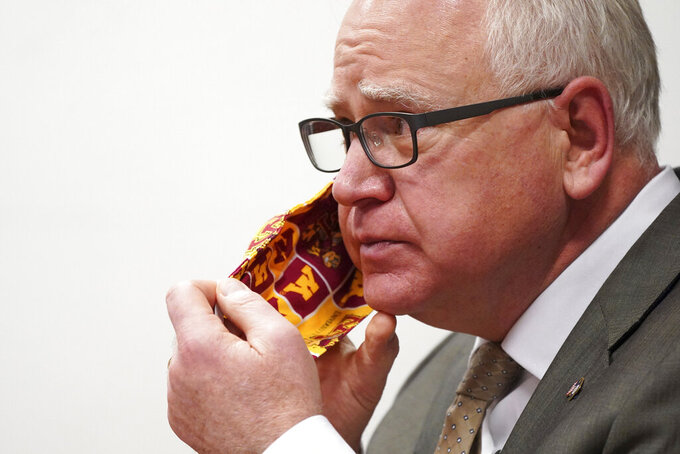 Minnesota Gov. Tim Walz takes off his University of Minnesota cloth face mask to answer a question from a reporter during a press conference for reporters not in the Twin Cities metro area to debut his state budget plan for the next two years Tuesday, Jan. 26, 2021 at the Department of Revenue building in St. Paul, Minn. (Anthony Souffle/Star Tribune via AP)

ST. PAUL, Minn. (AP) — Democratic Gov. Tim Walz has raised $1.7 million for his likely 2022 reelection bid since he took office two years ago and finished 2020 with $1.3 million in the bank, his campaign committee said Tuesday.

While Walz has not formally announced that he'll seek a second term, his campaign said that he raised an additional $550,000 last month, which was not reflected in the two-year report.

“This has been a challenging year for all of us, so to know that Minnesotans continue to believe in our message of One Minnesota is truly heartening," Walz said in a statement that echoed his 2018 campaign slogan.

His campaign also said it has hired Alana Petersen as a senior advisor. She managed Sen. Tina Smith’s 2018 campaign and was a senior advisor to President Joe Biden’ campaign in Minnesota. That announcement coincided with one from the state's Democratic-Farmer-Labor Party that it had hired four staffers to bolster organizing efforts for 2022.