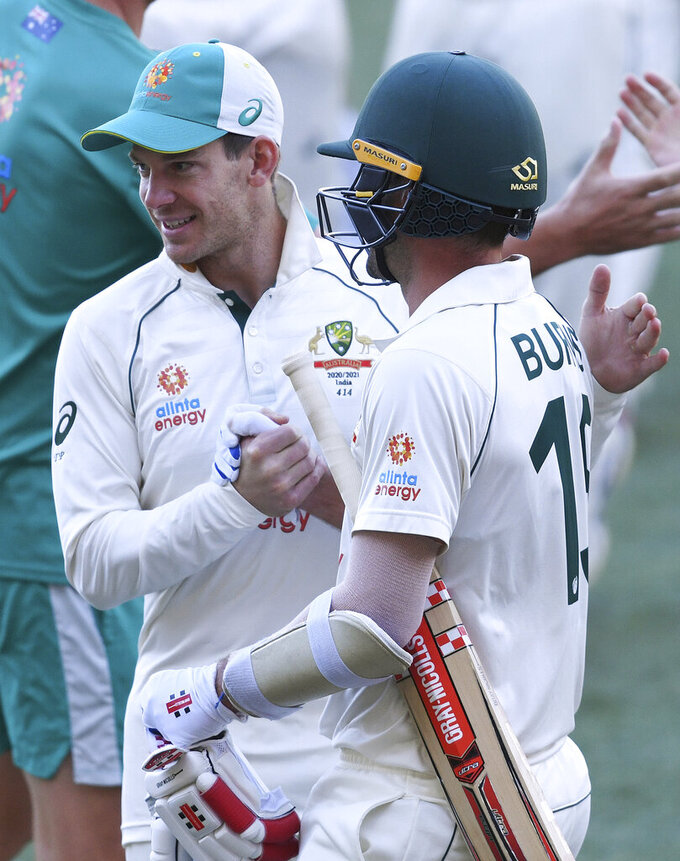 Australia's Joe Burns, right, is congratulated by his captain Tim Paine after Burns hit a 6 to win their match over India on the third day of their cricket test match at the Adelaide Oval in Adelaide, Australia, Saturday, Dec. 19, 2020. (AP Photo/David Mariuz) 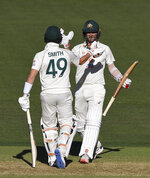 MELBOURNE, Australia (AP) — Opener David Warner and bowler Sean Abbott will not play in the second cricket test against India at the Melbourne Cricket Ground beginning Saturday due to a combination of injuries and COVID-19 quarantine restrictions.

“While neither player has been in a specific ‘hotspot' on Sydney's northern beaches as outlined by NSW Health, Cricket Australia’s biosecurity protocols do not allow them to rejoin the squad in time for the Boxing Day test,” Cricket Australia said in a statement Wednesday.

Cricket Australia said no additional players will be added to the squad for the Melbourne match.

With 22-year-old star batsman Will Pucovski already ruled out from making his test debut at the MCG due to a concussion, it means Australia could remain unchanged for the second match.

Matthew Wade will again likely partner Joe Burns at the top of the order after they put on a 70-run stand in Saturday’s successful second-innings chase.

The pair will both rejoin the Australian team ahead of the third test, which is still scheduled for the Sydney Cricket Ground beginning Jan. 7. It is possible the test could be moved to the MCG because of Sydney’s COVID-19 outbreak.

Australia overwhelmed India by eight wickets in the series opener in the day-night test at the Adelaide Oval, bowling out the visitors for a record-low of 36 in their second innings.