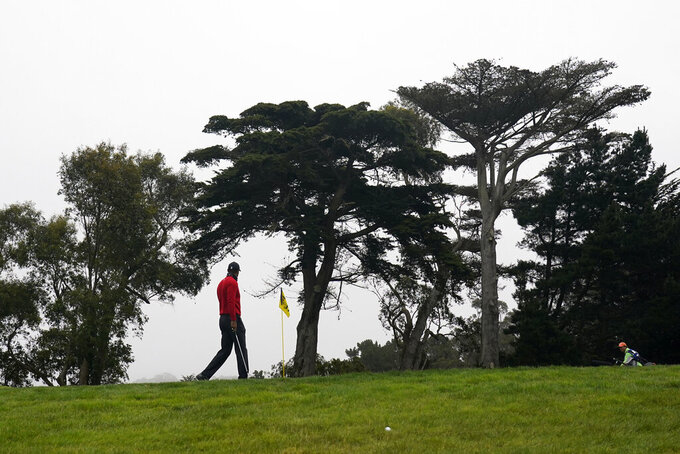 Tiger Woods walks to the 11th green during the final round of the PGA Championship golf tournament at TPC Harding Park Sunday, Aug. 9, 2020, in San Francisco. (AP Photo/Jeff Chiu) 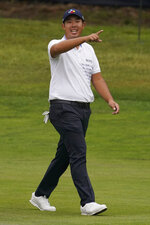 If you're a three-time NBA champion and two-time league MVP, you can skirt the ban on fans at the PGA Championship.

Golden State Warriors guard Stephen Curry was deputized as a “guest reporter” for the final round of the tournament, making him one of the few outsiders allowed on the course at TPC Harding Park in San Francisco on Sunday.

Curry, who is not in the NBA bubble in Florida because the Warriors didn't qualify for the NBA restart, asked the first two questions at winner Collin Morikawa's news conference. He even offered to carry Morikawa's bag if caddie J.J. Jakovac was busy. (Jakovac is a Warriors fan but Morikawa, who went to school at Berkeley but is a Los Angeles-area native, declared himself a Lakers fan.)

“I’m free for the next three months if you need a caddie or replacement,” said Curry, who was wearing a mask but Morikawa still recognized him on the course. “J.J. is a great guy, but if you need me, I’m available.”

Curry also asked Morikawa if he watches the leaderboard when he's playing in a tournament.

NEGATIVE ON THE POSITIVES

The PGA announced that none of the players or caddies tested at the tournament were positive for the coronavirus.

“We conducted more than 300 player and caddie tests this week with no new positive results,” PGA Chief Championship Officer Kerry Haigh said in a statement after the final round. “The players and caddies deserve credit for continuing to carefully follow the health protocols that are in place for the well-being of all involved with the PGA Championship and the San Francisco community.”

After shutting down in March along with most other activities, the PGA Tour returned to play in June but without fans. The PGA Championship was the first major to be played since the pandemic outbreak.

Tiger Woods doesn’t know how the strange, compressed schedule will affect him for the rest of the year.

Then again, no one else does, either.

“No one has ever experienced this, having a shutdown during the year,” Woods said as he looked ahead to the FedEx Cup playoffs that will be followed two weeks later by the U.S. Open. “It is very different. This is unlike any other year that we’ve ever experienced in golf.”

Woods shot a 3-under 67 on Sunday in the final round of the PGA Championship to finish the tournament at minus-1 — 10 strokes behind leader Dustin Johnson as he waited to tee off. Woods will take next week off before the three-week stretch of the playoffs that begin outside of Boston on Aug. 20; the U.S. Open, which was postponed from June, will be two weeks after the tour championship.

Although the schedule is new for everyone, it will be a special challenge for Woods, who at 44 has a balky back and hasn’t played on back-to-back weekends since the President’s Cup in December.

“We’ve been training for that. Trying to get my strength and endurance up to that ability to making sure that I can handle that type of workload,” Woods said. “We’ll be pushing it hard to make sure that I can stay strong and have the endurance to keep on going.”

Woods struggled at TPC Harding Park for the first three rounds before putting together a solid round on Sunday, when he was already out of contention. He had five birdies and two bogeys, including a 5 on the par-4 18th hole that left him signing for a 67.

If only it had happened sooner.

Koepka, a four-time major winner, was two strokes off the lead after Saturday's round when he said he likes his chances because “A lot of the guys on the leaderboard, I don't think have won (a major). I guess DJ's only won one.”

It was the “only” that irked McIlroy. Asked about the comments on Sunday, he said Koepka's attitude reveals "a very different mentality to bring to golf that I don’t think a lot of golfers have.”

“I certainly try to respect everyone out here. Everyone is a great player. If you’ve won a major championship, you’re a hell of a player,” said McIlroy, who has won four. “Doesn’t mean you’ve only won one; you’ve won one, and you’ve had to do a lot of good things to do that.”

Koepka has won four majors and seven tournaments in all. Johnson has won 21 events.

“Sort of hard to knock a guy that’s got 21 wins on the PGA Tour, which is three times what Brooks has,” McIlroy said.

A bigger problem for Koepka than his mouth: He quickly took himself out of contention on Sunday, shooting 4 over on the front nine.

Byeong Hun An made the first hole-in-one of the tournament, landing his tee shot on No. 11 about 15 feet from the hole before it bounced a few times and rolled the last three feet.

Usually golfers figure out they landed an ace from the cheering galleries. But with no spectators allowed at TPC Harding Park because of the coronavirus pandemic, it was the scream of a lone volunteer that got the message to An on the tee box 189 yards away.

He belatedly threw up his arms in celebration and had a chuckle with playing partner Sepp Straka.

“Judging by his reaction, it’s got to be,” Straka said.

Tiger Woods was one group ahead of the twosome and had just teed off on No. 12; he missed the commotion while concentrating on his drive. But he had a chance to catch up with An later in the round.

“We got a chance to say congratulations to Ben,” Woods said. “And he owes a round to all of us.”

DIVOTS: The small consolation for Matthew Wolff and Cameron Champ? They’ll be at the next major, too. By finishing among the top 10, they earned exemptions into the U.S. Open next month at Winged Foot. The U.S. Open went to an all-exempt field because the pandemic kept nationwide qualifying from happening. ... Jon Rahm moved back to No. 1 in the world, replacing Justin Thomas. ... Denny McCarthy finished at plus-2 despite carding eagles in each of the last three rounds.