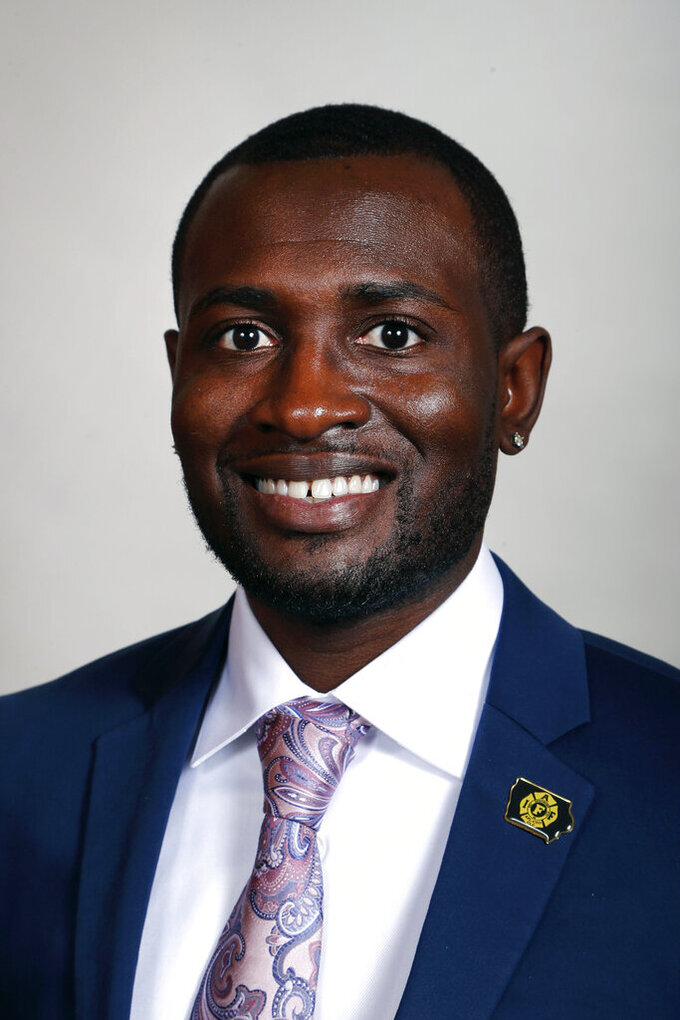 FILE - Shown in this Tuesday, Feb. 7, 2017, file photo is State Rep. Ras Smith, D-Waterloo, at the Statehouse in Des Moines, Iowa. Smith, a state representative from eastern Iowa, is the first Iowa politician to announce a run for Iowa governor as Democrats organize in hopes of gaining traction among voters to counter Republican domination of the legislature and governor's office. Smith launched an ad campaign Tuesday June 15, 2021, and set a formal announcement for Tuesday evening. (AP Photo/Charlie Neibergall)

DES MOINES, Iowa (AP) — A Democratic state representative from eastern Iowa who chaired the Legislative Black Caucus and advocated for the safety of meatpacking plant workers early during the pandemic became the first person to announce a run for governor next year.

Rep. Ras Smith launched an ad campaign Tuesday morning, hours before he was expected to formally announce his bid.

“I have faith that when we work together, when we use new eyes to look at old problems, we can build a state where everyone can succeed,” Smith says in his new ad, which launched on social media.

Smith is serving his third term representing an area of Black Hawk County that includes his hometown of Waterloo.

The 33-year-old lawmaker was a strong advocate for meatpacking workers in his county last year when hundreds were sickened by the coronavirus and several died of COVID-19. He criticized plant officials and state inspectors, saying they failed to respond quickly to the disaster.

Smith also was chairman last year of the Legislative Black Caucus and helped write a bill that banned most police chokeholds and required bias prevention and de-escalation training for officers following the death of George Floyd in Minneapolis. It passed unanimously and was signed by the governor last June.

The victory turned to disappointment, however, when Republican legislative leaders declined to follow through on promises that they’d consider further criminal justice reform measures this year. Instead, they pushed through a bill guaranteeing new rights and privileges for police and increased penalties for protesters.

“Would it have been too hard to do the right thing?” Smith asked during the House floor debate in May on the police bill, which Gov. Kim Reynolds will sign into law this week.

Smith’s campaign also is likely to call attention to Reynolds’ handling of the pandemic, including her resistance to mask mandates and insistence on schools meeting in person. She frequently claims that Iowa had one of the fastest economic recoveries in the nation, but the state also has had more than 6,000 COVID-19 deaths.

Reynolds has not formally announced she’s running for another term, but she has signaled her intentions to do so and is expected to make an announcement soon.

Smith’s announcement comes as House Democrats announced the election of Rep. Jennifer Konfrst as the first woman to lead their caucus.

Konfrst, an associate professor of journalism at Drake University from the Des Moines suburb of Windsor Heights, is serving her second term. She succeeds Todd Prichard who has decided to leave the leadership role.

“For too long, Republicans have put the needs of special interests ahead of Iowans’ needs. It’s time for a change in the Iowa House, and I’m ready to get to work,” she said.

Republicans have controlled the Iowa House and governor’s office since 2011 and the Iowa Senate since 2017.