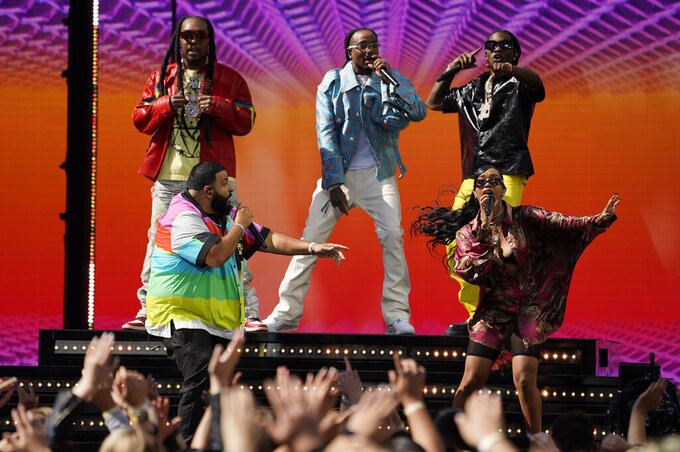 DJ Khaled, front left, and H.E.R., front right, perform with Takeoff, from background left, Quavo and Offset, of Migos, at the Billboard Music Awards on Sunday, May 23, 2021, at the Microsoft Theater in Los Angeles. (AP Photo/Chris Pizzello) 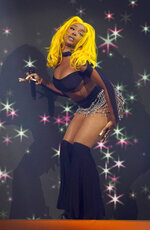 NEW YORK (AP) — The Weeknd is having a great weekend: The pop star nominated for a whopping 16 Billboard Music Awards has won eight — so far.

“I'd like to thank my fellow nominees. It's been a dark year and you brought light and an escape with your music," The Weeknd said onstage at Sunday's show, collecting the night's first televised award.

The awards show kicked off with a collaborative performance by DJ Khaled, H.E.R. and Migos, who performed for a number of fans outside of the Microsoft Theater in Los Angeles, bringing the concert vibe back to life a year after live shows were in the dark because of the pandemic.

“How great is it to be back together again," said Nick Jonas, who is hosting the awards show airing live on NBC.

The event will feature a mix of live and pre-taped performances. Doja Cat and SZA — accompanied by futuristically dressed background dancers — sang their big hit “Kiss Me More" inside the venue, where the seats were empty.

Like The Weeknd, another Canadian star is poised to have a big night: Drake. He walked into the show as the most decorated winner in the history of the Billboard Awards, extending his record to 28 wins after being named top streaming songs artist Sunday. He will receive the Artist of the Decade Award later in the show.

Drake and The Weeknd will battle for the show's top prize — top artist — where competition includes Taylor Swift and late rappers Juice WRLD and Pop Smoke, who won four honors in a pre-show announced Sunday, including top new artist, top rap artist and top rap album for his debut album “Shoot for the Stars, Aim for the Moon."

The Weeknd, Swift, Juice WRLD and Pop Smoke will compete for top Billboard 200 album, along with Lil Baby.

Unlike other awards shows where committees determine nominees, the Billboard Awards' finalists are based on album and digital sales, streaming, radio airplay and social engagement. The nominees for the 51 categories are based on the chart period of March 21, 2020, through April 3, 2021.

It's the reason why controversial country singer Morgan Wallen won three honors, including top country artist and top country album for “Dangerous: The Double Album," which has had major success on the pop and country music charts.

Because Wallen, nominated for six awards, was caught on camera using a racial slur earlier this year, he wasn’t allowed to compete at the Academy of Country Music Awards or CMT Music Awards. Billboard Awards producer dick clark productions said it couldn't prevent Wallen from earning nominations, or winning, but it did ban the singer from participating in the show.

BTS and Bad Bunny won three awards each, and they will also perform. Other performers include twenty one pilots, Karol G, Alicia Keys, Duran Duran, Jonas Brothers with Marshmello, and Pink, who will earn the Icon Award.