'Welcome home': Premier League's soul is back as fans return 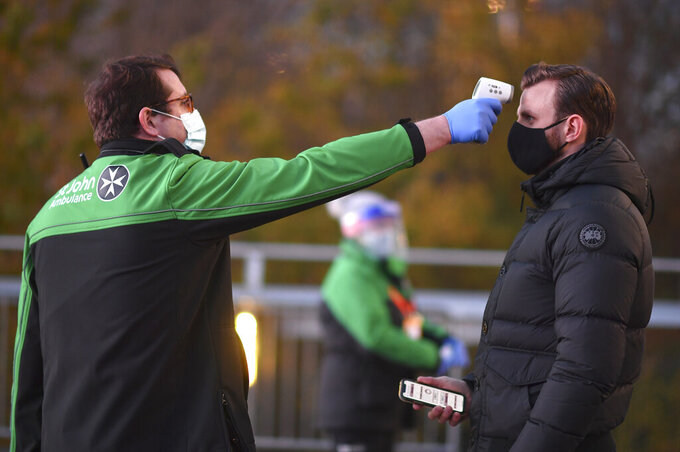 A West Ham United fan has their temperature taken before entering the stadium prior to the English Premier League soccer match between West Ham United and Manchester United at the London stadium in London, England, Saturday, Dec. 5, 2020. (Justin Setterfield/Pool Via AP)

LONDON (AP) — Chris Dixon's eyes welled up as he prepared to return to his seat.

From Upton Park to the Olympic Stadium, Dixon has been coming to West Ham games across seven decades. Nine months without being able to come to watch his beloved team has been agony.

“I never thought at my age I would get so excited about winning a ballot for a football match — it's been fantastic,” the 71-year-old Dixon said. “All my supporter friends are gagging to get back. I'm quite emotional really. It gets in my throat. I really am so pleased to be back.”

For the visit of Manchester United, Dixon was part of a landmark moment in English football. Never before had supporters been shut out of games for so long.

The east London stadium welcomed the first, very restricted crowd at a Premier League game since March when the coronavirus pandemic that has killed more than 61,000 in Britain forced unprecedented restrictions.

“Welcome home,” read the message flashing on the stadium’s exterior screen, although the players couldn't deliver on the field, losing 3-1 to United.

Only 2,000 fans were allowed into a stadium that can fit 60,000 on Saturday — after temperatures were checked and face coverings donned. Such is the lingering threat from COVID-19 which claimed another 397 lives in the 24 hours before the match.

But after months of matches in soulless empty stadiums, having a fan chorus once again for the Cockney club anthem “I’m Forever Blowing Bubbles” was a godsend.

Coming to football has long been a welcome distraction for many from everyday life, with fans often traveling the length of the country — however limited the prospect of glory.

The highest West Ham has finished in the league is third in 1986. The last major title was the 1980 FA Cup.

“I go home and away, every game, up and down the country,” 31-year-old supporter Ben Harris said. "It’s just huge."

Although Harris and the West Ham faithful could celebrate Tomas Soucek’s goal — and see the bubble machine kick into action — they had to endure a second-half collapse as United scored three times.

“My life’s back," Harris said. "It’s the one thing I’ve missed all through lockdown. I work hard during the week, my escape is to come here a couple of hours a week. It’s what I do.”

But only half of the Premier League's 20 stadiums are allowed to have fans — mainly in London, where Chelsea also had a couple of thousand watching Saturday's 3-1 victory over Leeds.

“Their input was huge, the noise they made,” Chelsea manager Frank Lampard. “And you could see how excited they are at the end that we are top of the league.”

Ten teams, including Leeds and Manchester United, are in cities that remain subject to the toughest coronavirus restrictions, leaving supporters shut out for now.

In the other major leagues — France, Germany, Italy and Spain — the seats are empty.

But the walk to the West Ham stadium, through a packed indoor shopping mall, left fans perplexed at such restricted numbers in vast outdoor arenas.

“I feel very, very safe, absolutely," Dixon said. “Never had one doubt about coming back.”

The turnstiles being closed for so long meant this was the first time fans were in attendance to see players take a knee, as they have done since June to show solidarity with the Black Lives Matter movement.

While the moment was respected at the Olympic Stadium and Stamford Bridge, there was booing in the second division by some Millwall fans when the symbolic gesture was performed at kickoff against Derby.