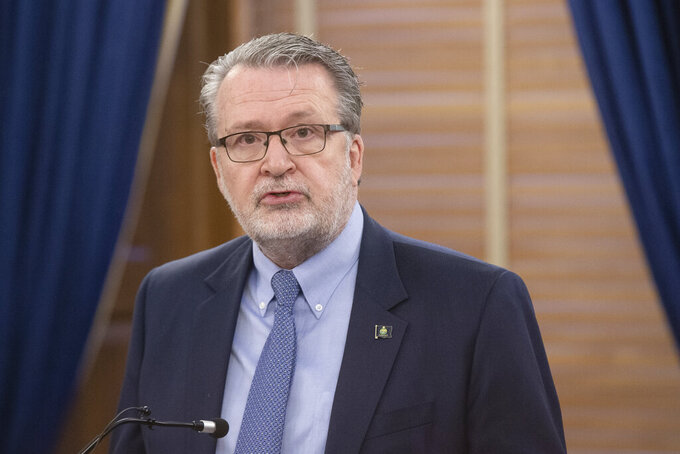 Lt. Gov. Lynn Rogers was named as the next state treasurer of Kansas by Gov. Laura Kelly during a news conference at the Statehouse, Thursday, Dec. 10, 2020, in Topeka, Kan. (Evert Nelson/The Topeka Capital-Journal via AP)

TOPEKA, Kan. (AP) — Half of the 10 Kansas officials eligible along with Gov. Laura Kelly for early COVID-19 vaccine shots are opting to wait, while the others are waiting or aren’t sure of their plans.

Kelly designated herself and the other officials for early shots in an effort to protect state government operations during the coronavirus pandemic.

All four said they would wait.

Ryckman, who was briefly hospitalized with COVID-19 during the summer, said he declined an early shot until all nursing home residents and front-line workers get shots. Masterson had much the same reason.

Finch said in an email to The Associated Press: “I couldn’t take the vaccine in good conscience while front-line medical providers and residents in nursing homes still haven’t received their doses."

Wilborn is recovering from complications from a recent COVID-19 infection and said he’s been advised not to get a shot yet. He and Ryckman are among seven legislators who’ve been infected since March.

A spokesman for Attorney General Derek Schmidt, a Republican, said he encourages people to get vaccinated but is waiting with “other healthy 52-year-olds” for his turn because others have a more urgent need for the vaccine.

Schmidt is considered a potential candidate for governor in 2022.

Insurance Commissioner Vicki Schmidt, a Republican, is a pharmacist. She said she would join fellow health care workers in getting vaccinated.

“I hope to spur confidence in the vaccine and encourage others to become vaccinated as well,” she said in a statement.

Also eligible for early vaccines are State Treasurer-designate Lynn Rogers, who's filling a vacancy in that office starting in early January, and David Toland, named by Kelly to replace Rogers as lieutenant governor.

Kelly's office said both would get their shots.

Luckert said in a statement that she doesn't know when she’ll get vaccinated.

A spokeswoman for Schwab, a Republican, said only that he “looks forward to receiving the vaccination at the appropriate time.”