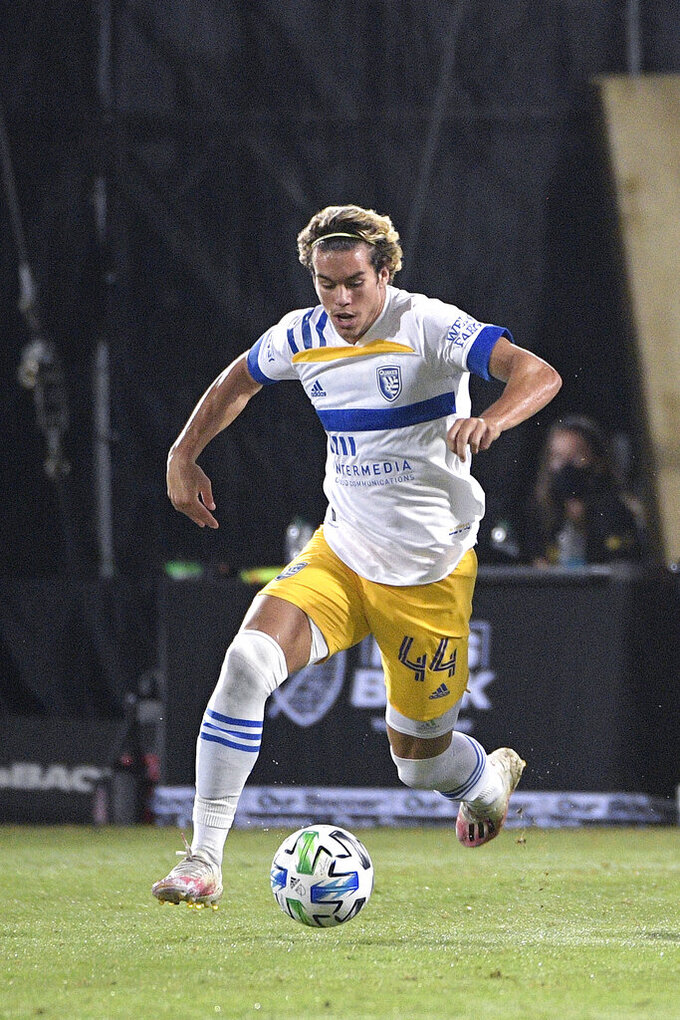 FILE - San Jose Earthquakes forward Cade Cowell (44) plays against Real Salt Lake during the second half of an MLS soccer match in Kissimmee, Fla., in this Monday, July 27, 2020, file photo. Clark is being talked about as a potential breakout star for the upcoming Major League Soccer season. (AP Photo/Phelan M. Ebenhack, File)

Prospects: Sporting director Claudio Reyna has built a team with a good mix of veterans — including defender Matt Besler and proven talent like Paraguay's Cecilio Dominguez and midfielder Alex Ring — and youngsters that includes draft pick Daniel Pereira. Goalkeeper Andrew Tarbell seems to have won the preseason battle with Brad Stuver. Look for the possibility of a strong connection between Dominguez and fellow Paraguayan Rodney Redes.

Prospects: The Rapids look to build on last season's trip to the playoffs, their first since 2016. The Rapids traded Kei Kamara to Minnesota in September but made no sweeping changes in the offseason. They have options up top with new arrival Michael Barrios. Diego Rubio and Andre Shinyashiki will need to up their scoring. The player to watch is 19-year-old Cole Bassett, who has earned a look by the U.S. national team. European clubs may come calling soon. Center back Lalas Abubakar holds down the backline.

Prospects: FC Dallas had it rough last season when the team was eliminated from the MLS is Back tournament before it even started because of coronavirus cases. But Dallas returned for the continuation of the regular season and started to gel with new arrivals Andres Ricaurte and Franco Jara, who are expected to start along with offseason acquisition Jader Obrian from Colombia. Jimmy Maurer is a steady presence in goal. And Dallas just keeps on benefitting from a strong development system.

Prospects: The team enters season No. 2 under Tab Ramos, the former U.S. youth national team coach. Houston struggled in his first season, finishing last in the West. The big acquisition in the offseason was defender Tim Parker from the New York Red Bulls, whom the Dynamo will count on to shore up a defense that allowed 40 goals last season. Houston also acquired midfielder Derrick Jones from Nashville. Fafa Picault and Darwin Quintero will be counted on to bolster the attack. Quintero had seven goals and seven assists to lead the team last season, his second with Houston.

Prospects: Former Toronto coach Greg Vanney takes over the Galaxy this season. His predecessor, Guillermo Barros Schelotto, lasted just two seasons. Vanney, a former player for the Galaxy, will be taxed with boosting star Javier “Chicharito” Hernández, who had a disappointing debut season last year with just two goals. The team is loaded with other talent, too, including Jonathan Dos Santos, Sebastian Lletget and Sacha Kljestan. Goalkeeper Jonathan Bond was brought in from West Brom. It will be up to Vanney to get everyone on the same page.

Prospects: After soaring in 2019 with the league's best overall record in the team's second season, LAFC had a bit of a downturn last season with the absence of Carlos Vela — who missed the MLS is Back tournament because of the birth of a child and then injured his knee. Now healthy, LAFC looks for him to regain his 2019 form, when he won the Golden Boot with 34 goals. Diego Rossi was the top scorer last season with 14 goals, but he missed the team's first-round playoff game against the Sounders because of the coronavirus. LAFC was eliminated with a 3-1 loss.

Prospects: Emanuel Reynoso was picked up by United late last season and had an immediate impact, with a goal and seven assists in the team's surprising run to the conference finals. Ethan Finlay, Ozzie Alonzo, Robin Lod and Jan Gregus form a solid foundation that is key to Minnesota's success. United was one of the league's best defensive teams last season, allowing just 26 goals, but there are questions surrounding the return of Ike Opara, who missed last season and this preseason with an undisclosed illness.

Prospects: With stalwarts Diego Chara and Diego Valeri getting older, the Timbers look to Diego Chara's younger brother, Yimmy, to usher in a new era. Yimmi joined the Timbers last season and took on a greater role when Sebastian Blanco was lost for the season with a torn ACL. Portland won the MLS is Back tournament but was eliminated in the opening round of the playoffs by Dallas. Blanco is back at training and there are hopes he'll play from the start. There's lots of buzz surrounding Argentine left back Claudio Bravo.

Prospects: RSL scored just 25 goals last season, fewest in the West. They addressed this by signing American striker Bobby Wood, who is joining RSL once he wraps up the 2. Bundesliga season with Hamburg. Last season was tough on RSL, with owner Dell Loy Hansen becoming embroiled in controversy over comments he made after his players boycotted a game to protest the shooting of Jacob Blake. He later announced he would sell the team, and MLS took over the process in January.

Prospects: Wondo is back. The league's ageless all-time leading scorer keeps teasing that the latest season might be his last, then he's pulled back in again. He had seven goals to lead the team last season and, at 38, figures to start on top again this season. But the big issue for the Earthquakes is defense after giving up a league-worst 51 goals last year. The Quakes will turn to Peruvian defender Marcos Lopez, now in his third season. Homegrown goalkeeper JT Marcinkowski may get a real chance to develop this season.

Prospects: This team is always strong — the Sounders have been to the MLS Cup final four times in the last five seasons — and this year really should be no different. Setting the pace last season was Raul Ruidiaz with 12 goals and Nicolas Lodeiro with seven goals and 10 assists. Stefan Frei is always steady in goal. And Fredy Montero, the club's all-time leading scorer, is back. Perhaps the only missing piece is Jordan Morris, who will likely miss the season after injuring his knee while on loan with Swansea City. He had surgery in March.

Prospects: Sporting KC returns scorers Johnny Russell, who had six goals, and Alan Pulido, who had six goals and five assists but was hampered by injuries and international duty. Tim Melia is steady in goal. French defender Nicolas Isimat-Mirin is a nice addition to the stout backline — Kansas City's defense only gave up 25 goals last season, third fewest in the West. But Matt Besler's absence will be notable: a fixture for Sporting since 2009, Besler went to expansion Austin FC in the offseason.

Prospects: Last year, the Whitecaps came close to making the playoffs in head coach Marc Dos Santos' second year, but MLS based the standings on points per game so that teams that were hurt by the coronavirus got a shot at the postseason. It ended up hurting Vancouver instead. The addition of Bruno Gaspar, Caio Alexandre and Deiber Caicedo is a welcome upgrade. Like the league's two other Canadian teams, the Whitecaps will spend at least the first part of the season camped out in the U.S. because of travel restrictions. The Whitecaps will share Real Salt Lake's home for the foreseeable future.