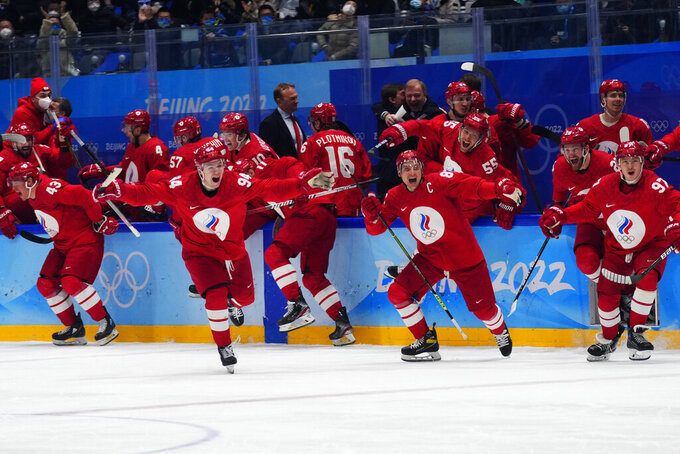 The Russian Olympic Committee celebrates the winning goal during a shootout by Arseni Gritsyuk in a men's semifinal hockey game against Sweden at the 2022 Winter Olympics, Friday, Feb. 18, 2022, in Beijing. (AP Photo/Petr David Josek)

To break that drought, the Finns will have to beat the defending champion Russians — the team that, if you include all of its various designations, has won as many Olympic titles in men's hockey as anyone.

All of the remaining medals at the Beijing Games are part of Saturday's TV coverage in the U.S. — if you count the wee hours of Sunday morning, when the women’s 30-kilometer cross-country skiing race will be on. The men's hockey final, as usual, will be a highlight. Also, American Elana Meyers Taylor has a chance to medal in the women's bobseld.

The Soviet Union won seven gold medals in men's hockey, the Unified Team won one, and the Olympic Athletes from Russia won in 2018. Add all that up, and that's nine gold medals for Russian hockey in various forms — the same number as Canada.

The Russians are competing this year as Russian Olympic Committee because Russia's name and flag were banned as part of the fallout from the country’s doping scandal.

The Russians go for another hockey gold when they face Finland in the gold medal game, which is set to air live on USA Network at 11:10 p.m. The bronze medal game between Sweden and Slovakia is live on CNBC at 8 a.m.

The U.S. Olympic and Paralympic Committee announced that Meyers Taylor — who has hinted she might retire after these Games — would carry the American flag into Sunday night’s closing ceremony. She was supposed to be one of the flagbearers at the opening ceremony, but she couldn't do it because she was in isolation after a positive COVID-19 test. She got out in time to compete.

Sui Wenjing and Han Cong of China set a world record with their short program, and they lead Russians Evgenia Tarasova and Vladimir Morozov heading into the pairs' free skate. That will be live on USA Network at 6 a.m., and NBC will show it in prime time.

The figure skating gala will be live on NBC's late-night coverage.

Sui and Han won silver at the 2018 Pyeongchang Games.

Sweden finished second in the men's curling tournament in 2018, losing to the U.S. in the final. Now skip Niklas Edin, who also won bronze in 2014, has another chance for gold against Britain. That match will be on USA Network live early in the morning.

The women's final between Britain and Japan will be live on CNBC at 8 p.m. The women's bronze medal match between Sweden and Switzerland will be on USA Network.

USA Network will have that women's cross-country skiing race live during its late-night coverage. ... The men's and women's mass start finals in speedskating will be on NBC in the afternoon. They'll be on live on USA Network early in the morning.