What Would Have Been: Red Sox-Cards and a CWS title 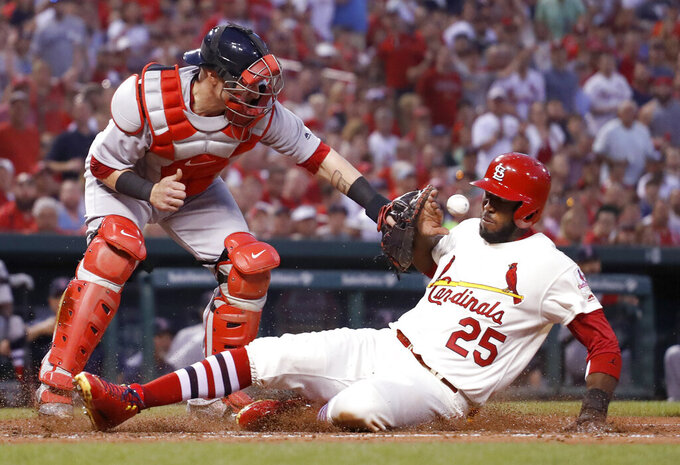 FILE - In this May 16, 2017, file photo, St. Louis Cardinals' Dexter Fowler (25) scores as Boston Red Sox catcher Christian Vazquez is unable to catch the ball during the third inning of a baseball game in St. Louis. Most of the games played between the Red Sox and Cardinals have been in the World Series. If not for the coronavirus pandemic, they would have been playing a regular-season series next weekend at Fenway Park. (AP Photo/Jeff Roberson, File)

Most of the games played between the Boston Red Sox and St. Louis Cardinals have been in the World Series. If not for the coronavirus pandemic, they would have been playing a regular-season series next weekend at Fenway Park. There also would have been a College World Series title won in Omaha, Nebraska. The Associated Press looks at some of the sporting events that had been scheduled the week of June 22-28:

MLB: The Red Sox and Cardinals have met in four World Series, a total of 24 postseason games. St. Louis beat the Red Sox in a seven-game series in 1946 and then 1967 when Bob Gibson's win in the clinching game was his third that series. Boston won its first World Series title since 1918 by sweeping the Cards in 2004, and won a six-game series in 2013. They have evenly split 16 regular-season games, the last in 2017 when the Red Sox won all four.

Nick Castellanos finished last season with the Chicago Cubs before the outfielder/third baseman signed a $64 million, four-year deal with the Cincinnati Reds. The Reds were scheduled to host a series against the Cubs for the second time in a three-week span.

CWS: The end of the road in Omaha with a best-of-three series to determine the NCAA baseball champion. The College World Series begins with eight teams split into two four-team brackets playing a double-elimination format. The two bracket winners then meet for the championship series. Vanderbilt won its second title in six seasons last year by taking two-of-three from Michigan.

TRIVIA BREAK: Which school has won the most NCAA baseball titles since the College World Series went to the current best-of-three championship series format in 2003? (answer at bottom).

NBA DRAFT: The 2020 draft that was originally scheduled Thursday night in Brooklyn has been pushed to Oct. 16. The top two picks in last year's NBA draft are waiting for the resumption of the season with their teams still in playoff contention. Zion Williamson was the No. 1 overall pick by the New Orleans Pelicans out of Duke last summer, and Ja Morant went No. 2 to the Memphis Grizzlies from Murray State.

NHL DRAFT: The last time American players were taken No. 1 overall in consecutive NHL drafts was 2006 and 2007. Jack Hughes, an 18-year-old from Orlando who excelled in the USA Hockey National Team Development Program, was the top pick by New Jersey in last year's draft. This year's draft was scheduled Friday and Saturday in Montreal. Hughes' rookie season is over because the Devils aren't among the 24 teams in the NHL's postseason plan. He had seven goals and 14 assists in 61 games.

TRIVIA ANSWER: Oregon State with three, winning the championships in 2006, 2007 and 2018. The Beavers and South Carolina (2010 and 2011) are the only teams under the current format to win consecutive titles. Vandy is the only other team with multiple championships since 2003.