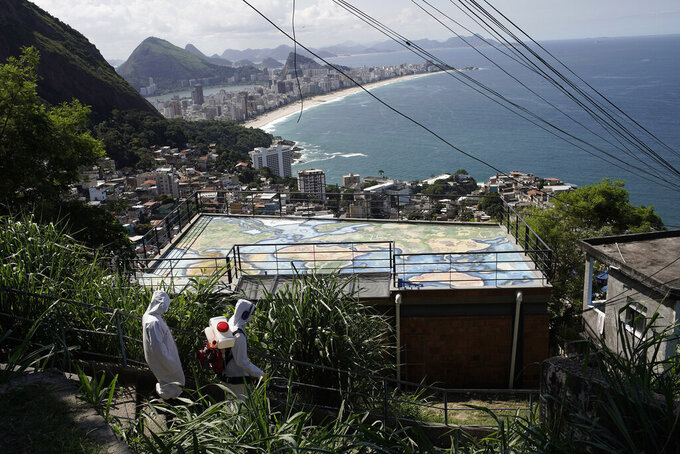 Water utility workers from CEDAE disinfect in the Vidigal favela, which overlooks the oceanfront Leblon and Ipanema neighborhoods, in an effort to curb the spread of the new coronavirus, in Rio de Janeiro, Brazil, Friday, April 24, 2020. (AP Photo/Silvia Izquierdo)

Cases of the new coronavirus are overwhelming hospitals, morgues and cemeteries across Brazil as Latin America’s largest nation veers closer to becoming one of the world’s pandemic hotspots. Medical officials in Rio de Janeiro and at least four other major cities have warned that their hospital systems are on the verge of collapse, or already too overwhelmed to take any more patients.

In the U.S., three states allowed certain businesses to reopen Friday with restrictions, even as the confirmed U.S. death toll from COVID-19 rose past 50,000 and health experts warned that it's too soon to ease lockdown orders. In Georgia and Oklahoma, salons, spas and barbershops reopened with a green light from their Republican governors. Alaska allowed restaurants to resume dine-in service and retail shops and other businesses to reopen.

Also Friday, President Donald Trump signed a $484 billion bill that aids employers and hospitals under stress from the coronavirus pandemic. The deadly outbreak has devastated broad swaths of the economy.

Here are some of AP’s top stories Friday on the world’s coronavirus pandemic. Follow APNews.com/VirusOutbreak for updates through the day and APNews.com/UnderstandingtheOutbreak for stories explaining some of its complexities.

— There have been discussions within the White House about changing the format of the briefings to curtail President Donald Trump's role. The briefings often stretch well beyond an hour and feature combative exchanges between the president and reporters. Advisers have been urging Trump to scale back his appearances at the briefings, saying that he should come before the cameras only when there is major news.

— Hollywood studios are shuffling more release dates, including a sequel to “Doctor Strange” and the latest entries in both the live-action and animated “Spider-Man” franchises. Late Friday, both Sony Pictures and The Walt Disney Co. announced updated theatrical release schedules that significantly delay some of their marquee superhero films. Marvel’s “Doctor Strange in the Multiverse of Madness,” the sequel to the 2016 Benedict Cumberbatch film, has been pushed back from November 2021 to March 2022.

— Taxpayers will pay restaurants to make meals for millions of California’s seniors during the coronavirus pandemic, an initiative that could pump billions of dollars into a devastated industry while generating sales tax collections for cash-strapped local governments. California has about 5.7 million people 65 and older and it’s not known precisely how many will be eligible.

— The national bill for fighting the new coronavirus is soaring and so is the federal budget deficit. Well over $2 trillion later, it’s unclear where that spending will end. One of the lasting legacies of the coronavirus pandemic will be staggering debts and deficits on the U.S. balance sheet, with shortfalls hitting levels that would have been unthinkable just a few decades ago.

— A handful of Texas businesses reopened Friday in defiance of state guidance in the fight against the coronavirus, which allows retailers to offer “to go” service but leaves other restrictions in place. In Dallas, hair salon owner Shelley Luther was issued a citation at midday but she refused to close her business. She had two stylists and a nail technician on duty, a fraction of her normal staff.

Veterans Affairs Secretary Robert Wilkie is taking advocacy of an unproven drug for the coronavirus even further than President Donald Trump. He’s claiming without evidence that it has been effective for young and middle-aged veterans in particular.

— 20 YEARS: That's how long the World Health Organization warns that the battle against malaria in sub-Saharan Africa, where it already kills hundreds of thousands of people a year, could be set back as countries focus energy and resources on containing the coronavirus.

— ERIC CHURCH: Country star Eric Church doesn’t know when concerts might resume in the United States after the spread of the coronavirus, but he wants people to feel safe when they return to hear live music.

— INSPIRATIONAL MESSAGES: Inspiration is contagious, too. The coronavirus pandemic has brought an outpouring of messaging for each other, in windows, on front doors, across walls, and colored onto driveways and sidewalks around the globe.