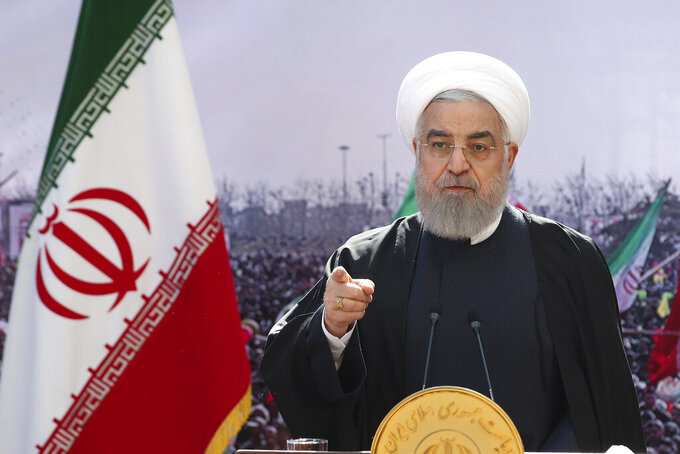 In this photo released by the official website of the office of the Iranian Presidency, President Hassan Rouhani addresses the nation in a televised speech in Tehran, Iran, Wednesday, Feb. 10, 2021. Rouhani said the West has no way except reaching an agreement with Tehran for restoring 2015 nuclear deal as the nation marked the anniversary of the country's 1979 Islamic Revolution on Wednesday on wheels - cars, motorcycles, bicycles - instead of traditional rallies and marches because of the region's worst outbreak of the coronavirus. (Iranian Presidency Office via AP) 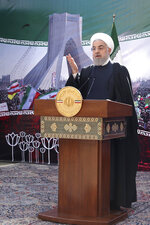 TEHRAN, Iran (AP) — Iran’s President Hassan Rouhani urged the West on Wednesday to restore the 2015 nuclear deal as the nation marked the anniversary of the country’s 1979 Islamic Revolution — on wheels this time, rather than traditional rallies and marches amid the worst COVID-19 outbreak in the Middle East.

Rouhani said the “era of sanctions” was over and that the agreement is the only way forward.

“There is no other way for the world and for the region," Rouhani said during a televised speech. "The only path is definitely the path of diplomacy. The only path is the world’s agreement with Iran. God willing, we will be successful in this path.”

Rouhani also said “God was the one who toppled" former President Donald Trump, who pulled the U.S. out of the nuclear pact and imposed sanctions on Iran. He said Iranians who resisted Trump pressures also were effective in Trump’s overthrow.

Trump lost the U.S. November election to Democrat Joe Biden, who wants to revive the deal, but insists that Iran must first reverse parts of its nuclear program. That's created a contest of wills between the nations. The 2015 atomic deal saw Iran agree to limit its enrichment of uranium in exchange for the lifting of economic sanctions.

On domestic issues, Rouhani, who has served the maximum of two consecutive terms, urged a high turnout in the June presidential election that will decide his successor. Traditionally, high turnout brings moderate presidents to office in Iran.

Meanwhile, waving Iranian flags, chanting “Death to America,” “Death to Israel” and burning U.S. and Israeli flags as has become a ritual in Iranian protests, Iranians in cars and on bikes commemorated the 42nd anniversary of the revolution that ousted the West-backed monarchy and brought Islamists to power.

For Rouhani, it’s the last such anniversary speech. Iranians are expected to elect his successor in presidential elections in June. Rouhani has served the maximum two mandates for president under Iran’s constitution .

State TV said hundreds of thousands drove cars and motorbikes through cities and towns, as well as motorboats in ports and around islands, after the government decided to replace traditional rallies and demonstrations with motorcades. In the capital, Tehran, processions of cars and other vehicles started out from 12 different points on Wednesday morning, driving through the streets to circle Tehran’s iconic Azadi Square, the traditional place of gatherings for anniversaries.

The country's military also put three ballistic missiles on display near Azadi square as army paratroopers jumped in nearby and schools' chorus performed on many junctions.

The celebrations come at a tense time, amid hopes that Iran will find relief from the harsh economic sanctions imposed by Trump in 2018 and as the country struggles with a surge in coronavirus infections.

The death toll from COVID-19 in Iran is nearing 59,000. Since the pandemic erupted last year, Iran has reported some 1.48 million confirmed cases of the virus. The country on Tuesday launched its coronavirus inoculation campaign, administering recently delivered Russian Sputnik V vaccines to healthcare professionals.

Iran's Islamic Revolution began with widespread unrest over the rule of Shah Mohammad Reza Pahlavi. The shah, terminally and secretly ill with cancer, fled Iran in January 1979. Ayatollah Ruhollah Khomeini then returned from exile and the government fell on Feb. 11, 1979, after days of mass demonstrations and confrontations between protesters and security forces.

In April 1979, Iranians voted to become an Islamic Republic, a Shiite theocracy with Khomeini as the country's first supreme leader with final say on all matters of state.

Anger over America for allowing the shah into the United States to receive cancer treatment in New York would later spark the takeover of the U.S. Embassy in Tehran in November 1979 by student militants and the subsequent hostage crisis, which kindled decades of enmity.