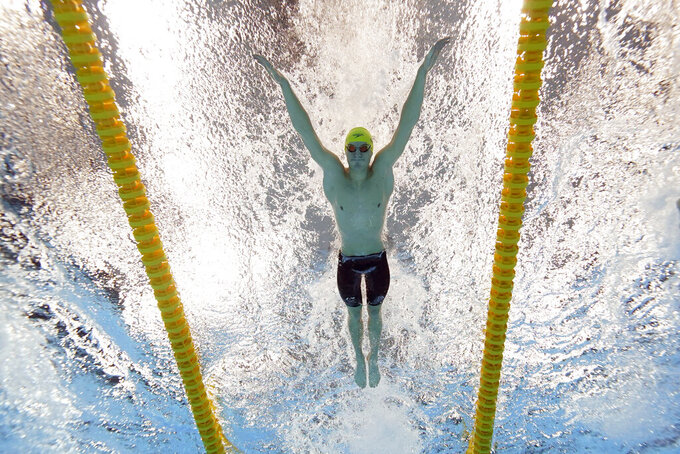 TOKYO (AP) — The thing about being a swimmer is you need a pool to practice in.

The pandemic put a real premium on them.

One side effect of the virus and resultant lockdowns across the globe has been the shutting down of big public pools, robbing lots of lanky swimmers of their space.

The default response seems to have been to find another pool, any pool, that you can get into. Calls went out to friends, relatives, neighbors or anyone with options.

“A year ago, a summer ago, we were trying to find backyard pools and friends of mine’s pools, and four-lane pools,” said U.S. swim team assistant coach Jack Bauerle. “I don’t like the word adversity because everyone has it but it was not easy for a lot of people.”

The U.S. team seems to have come through its brief water shortage last year pretty well judging by Sunday's medal haul in Tokyo.

For those who went looking for pools, it was unlikely they were going to find a 50-meter long one to match the Olympic dimensions at the Tokyo Aquatics Center. But, again, there were options.

South African swimmer Erin Gallagher did have a pool at her house but we're talking tiny. A few strokes and you're at the other side, and swimmers need to stretch out those long levers.

Gallagher solved that problem pretty smartly by attaching a cord to the back of her swimsuit and tying it to the side of the pool. She did much of her Olympic preps swimming on the spot, with a nice bit of resistance from the stretch cord.

Living in a bay in Melbourne on Australia's south coast, he figured the answer was right in front of him, and all around him really.

For two months last year while Melbourne's pools were shut down, Smith swam a 4-mile round trip out to sea and back to shore every second day to keep his training going.

There were all sorts of new challenges: Freezing cold water and tides and currents and little waves in the bay — Aussies call them "chops" — which meant he had to time his swims to get the best conditions. Sometimes he was swimming out there in the evening.

It kept him on course to win a bronze medal in the grueling 400-meter individual medley at the Olympics, but he wouldn't do it again, he said.

“When the Games were postponed for 12 months I knew it gave me an opportunity to better myself," he said. “I’d be one year older, one year stronger, one year faster.

"But in saying that I’ve gone through hell to get here having to swim in the ocean for two months.”