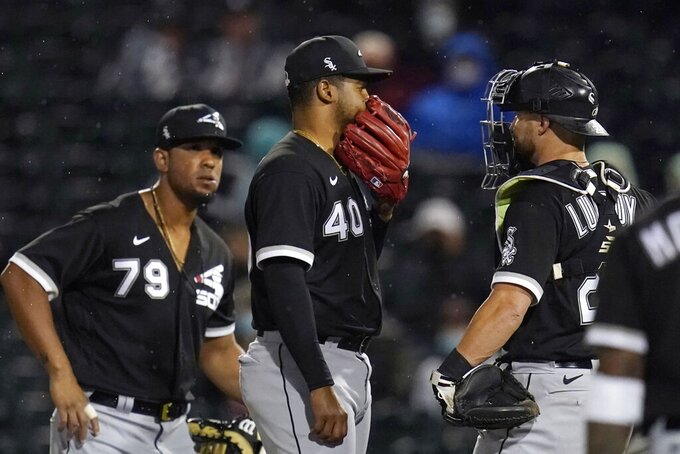 CHICAGO (AP) — Expectations are soaring on the South Side.

The Chicago White Sox come in with their sights set on a World Series championship perhaps as soon as this year following a breakthrough season.

They vaulted into the playoffs for the first time since 2008, then added to an already deep roster. After tying for second in the AL Central at 35-25 and ending a string of seven losing seasons, the White Sox see no reason why they can't contend for a title.

The White Sox haven't won it all since 2005. But they haven't been in a position like this since then, either.

The White Sox hired Tony La Russa for a second stint 3 1/2 decades after firing the Hall of Fame manager. And they added some big pieces to their roster.

The most notable was the $54 million deal for closer Liam Hendriks, who happened to be on the mound for the final out when Oakland eliminated Chicago in Game 3 of their wild card series last year. Chicago also boosted the rotation by acquiring Lance Lynn from Texas.

The White Sox boast a powerful lineup led by AL MVP José Abreu and 2019 major league batting champion Tim Anderson. The rotation, led by Giolito, and bullpen are deep, too. But it's not just the talent that impresses La Russa.

“Our guys upstairs have really fortified depth with the talent in every part of the team," he said. "I've seen talent half-step it, as far as they think that's all they need. You really need to practice right. ... The workload this club is willing to take on is impressive.”

All that has the White Sox thinking big, with the opener at the Los Angeles Angels on April 1.

The White Sox went all in while other teams were cutting back.

The bullpen, anchored by Hendriks, could dominate. The trade for Lynn gave them a workhorse starter to go with Giolito and Dallas Keuchel. But the most eye-opening move? Hiring La Russa to replace Rick Renteria.

The White Sox stuck with him when news of a drunken-driving arrest broke shortly after his hiring. LaRussa hasn't filled out a lineup card since the Cardinals won the World Series in 2011, and at 76, he is the oldest manager in the majors.

Though the White Sox feature a loaded lineup, they are handing the designated hitter spot to a 22-year-old with no experience above Class A. Then again, they have big hopes for Andrew Vaughn.

The No. 3 pick in the 2019 amateur draft, he was viewed as one of the most polished hitters coming out of college. He combined to hit .278 with six homers and 36 RBIs that year in the Arizona Rookie League and at Class A Kannapolis and Winston-Salem. With no minor league season in 2020, the only action he saw was at spring training and summer camp.

The White Sox are counting on Luis Robert to take his game to another level following a tantalizing rookie season.

The speedy center fielder won a Gold Glove as a rookie after signing a $50 million, six-year contract last winter. He got off to a great start at the plate, struggled in September and finished with a .233 average to go with 11 homers and 31 RBIs.

The White Sox have a strong one-two-three punch at the top of the rotation with Giolito, Keuchel and Lynn. As for the other two spots?

Dylan Cease has the potential to dominate if he can harness his command after issuing 34 walks in 58 1/3 innings last year. Carlos Rodon and Reynaldo López are also vying for a place in the rotation.

Michael Kopech could be a big part of it at some point, though he's in the bullpen for now as he pitches for the first time since 2018. He missed the 2019 season recovering from Tommy John surgery and opted out last year.