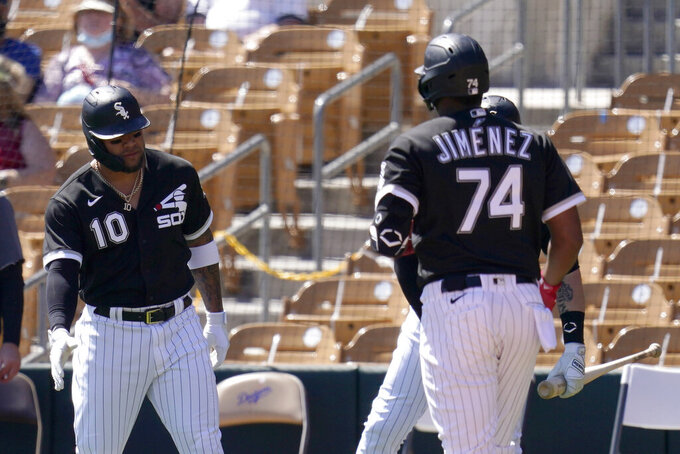 Chicago White Sox slugger Eloy Jiménez is expected to be sidelined for five to six months after rupturing his left pectoral tendon trying to make a play in the outfield during an exhibition game.

Jiménez needs surgery to repair the injury, putting his season in jeopardy. General manager Rick Hahn said the team will know more when he begins the rehab process.

“Obviously a difficult loss for us, important part of our offense, and one that is a bit of a shock to the system,” Hahn said Thursday on a video conference call, a day after Jiménez was hurt.

“At the same time, if there was one area of this team that perhaps could withstand a significant blow, it would arguably be on the offensive side of things," he said.

Even before the diagnosis, the injury immediately led to another round of questions about whether Jiménez might be better suited for designated hitter than left field — where he has gotten hurt a couple times since his big league debut in 2019.

“Our biggest concern is Eloy. He’s the guy who’s hurt. He’s the guy that’s got to go through the rehab,” manager Tony La Russa said.

“As a team, you look at what you have, not what you don’t have. We don’t have him, but we have other guys. It’s not going to be an open spot. Somebody’s going to play there.”

Chicago is looking for a deep postseason run after it made the playoffs last year for first time since 2008. With Tim Anderson, AL MVP José Abreu and Yoán Moncada, it has one of the most potent lineups in baseball, but Jiménez's prolonged absence leaves the team without one of its most dangerous hitters.

The 24-year-old Jiménez, who throws and bats right-handed, was acquired in a July 2017 trade with the crosstown Cubs. He hit 31 homers in his first year in the majors in 2019. He batted .296 with 14 homers and 41 RBIs in 55 games during the pandemic-shortened season.

Jiménez got hurt when he tried to make a leaping grab at the wall on Sean Murphy’s solo homer for Oakland in the second inning of their spring game. Jiménez’s left arm barely moved as he walked off the field with a trainer.

“Fundamentally, he got hurt trying to make a play,” Hahn said. “Was it the right decision to go for that ball, especially when put in the context of spring training? Perhaps not, but fundamentally you like the fact that he was trying to make the play.

“Ultimately, at some point in the much distant future, we’ll talk to him and talk through a plan about perhaps making some better decisions or what we are (expecting) of him going forward from a defensive standpoint.”

Asked directly about his confidence in Jiménez staying in left, Hahn said he was focused on getting Jiménez healthy right now.

Leury García, Adam Engel, Nick Williams and Billy Hamilton are among the potential replacements for Jiménez in left. Engel is expected to begin the season on the injured list with a strained right hamstring, but he could return in April.

The most intriguing option might be Andrew Vaughn, a first baseman who was selected by the White Sox with the No. 3 overall pick in the 2019 amateur draft. Vaughn, who has yet to make his big league debut, did some outfield work at the team's auxiliary site last summer and has continued to take some balls in the outfield during spring training.

“You'll see him out there as much as possible in the last (exhibition) games,” La Russa said.