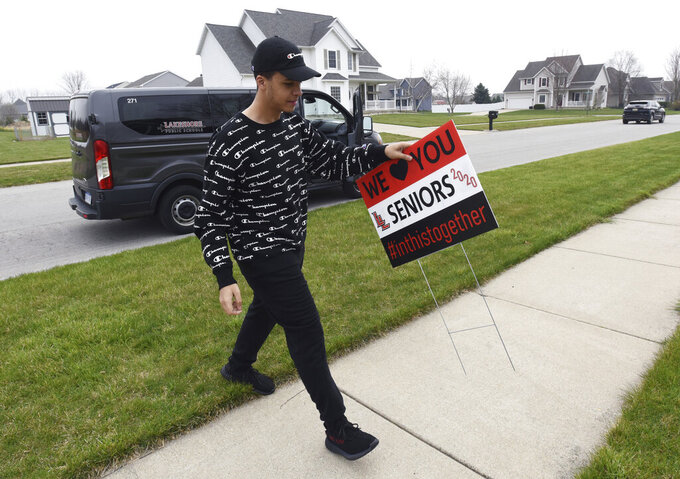 Austin Partee places a sign in the yard of a Lakeshore High School senior Friday, April 24, 2020, in Stevensville, Mich. Schools across the country have been closed since March due to the COVID-19 pandemic, putting plans for events such as proms and graduations in jeopardy.(Don Campbell/The Herald-Palladium via AP)

LANSING, Mich. (AP) — Gov. Gretchen Whitmer on Friday lengthened her stay-at-home order through May 15, while lifting restrictions so some businesses can reopen and the public can participate in outdoor activities like golf and motorized boating during the coronavirus pandemic.

The measure immediately replaces one that was scheduled to expire next week. Michigan has nearly 3,100 deaths related to COVID-19 after 108 more were reported, behind only New York and New Jersey among U.S. states.

People are now required, rather than encouraged, to wear face coverings in enclosed public spaces such as grocery stores if they can medically tolerate it. Employers must provide non-medical grade masks to their in-person employees.

Whitmer said people with multiple in-state homes can resume traveling between them, though it is strongly discouraged.

“We will consider this the preliminary stage of economic reengagement,” said the Democratic governor, adding that her administration is studying data and ramping up testing and contact tracing that are crucial. She urged people to stay home to prevent the spread of the virus and to adhere to social distancing guidelines when in public.

“We will make informed decisions in the coming days about potential further economic reenagement," she said. "But it depends on you.”

The order — which business groups called a positive step — continues to prohibit in-person work that is not necessary to sustain or protect life, with exemptions for various critical jobs. Restaurants remain closed to dine-in customers under a separate measure, and bars, movie theaters, gyms and other sports facilities also are still shuttered.

The prior stay-home order, in tandem with guidance issued by Whitmer's office, prompted lawsuits on behalf of anglers, landscaping companies, cottage owners and criticism from Republicans who control the Legislature. Amid a heated floor debate, the Senate voted on party lines Friday to limit her emergency powers despite a certain veto.

Both the House and Senate also formed a special joint committee to review the state government's response to the outbreak.

Whitmer defended the previous order, which she issued April 9 and was stricter than one that took effect March 24.

“Taking this aggressive action has really pushed that curve down and saved a lot of lives," said Whitmer, whose moves have been backed by health experts and in public polling. The state on Friday reported 1,350 additional cases for a total of more than 36,600, though the number of infections is thought to be far higher because many people have not been tested, and studies suggest people can be infected with the virus without feeling sick.

Whitmer said landscaping and other outdoor activities are “lower risk." While golfing is allowed, the use of carts is not. State parks will generally remain open and people already were allowed to run, walk, hike and ride bikes.

James Mastrangel, owner of Farmington Hills-based Hometeam Lawn Sprinkler Services, said it lost about $20,000 in gross sales over the past two weeks.

“We’re blessed,” he said. “We (only) lost two weeks of business. May is actually our biggest month, followed by June. It’s just going to be a delay.”

Whitmer told The Associated Press that her administration is talking with medical and business experts to assess different jobs and industries for risk, to promulgate safety protocols and to determine “markers” that need to be reached before reopening additional sectors. She said more will be revealed Monday.

“This is one of what will be many waves,” Whitmer told the AP. “My hope is that we can contemplate the next one. But it all depends on if people observe these best practices, if we can keep the COVID-19 trajectory headed downward and if we can keep people safe."

The governor's emergency and disaster declarations, which she cited again in the new stay-home order, may expire next Thursday.

One state law, from 1945, gives Whitmer broad authority to unilaterally declare and end an emergency, while another — enacted in 1976 — requires legislative approval for an extension. GOP senators voted to repeal the 1945 law and to cut in half how long a declaration can last if legislators do not vote.

Though Whitmer would veto the legislation if the House also passes it, a fight may be looming if Republicans refuse to lengthen the emergency as a way to demand future changes to the stay-home restrictions.