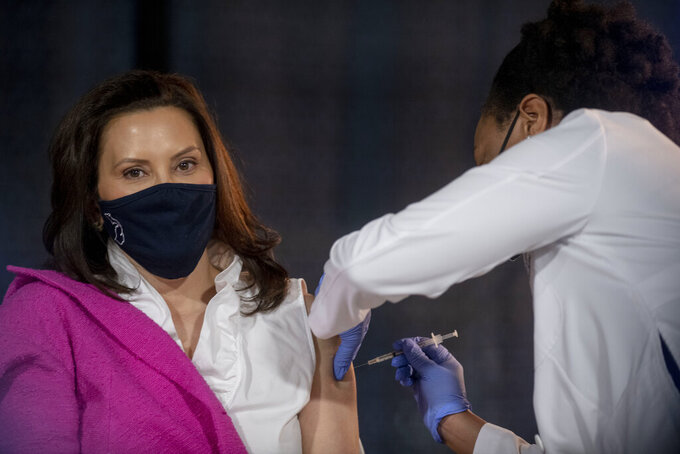 DETROIT (AP) — Gov. Gretchen Whitmer got her first COVID-19 vaccine shot Tuesday, touting it as the most effective way to protect people and to return Michigan to normalcy.

The governor, 49, was vaccinated at Ford Field's mass clinic alongside her 19-year-old daughter, Sherry, and other teens a day after eligibility expanded to everyone ages 16 and older. Whitmer said she was grateful and urged parents to ensure their high school- and college-age kids are inoculated, too.

The state is facing the country's highest rate of new coronavirus cases in the past two weeks, which the Democratic governor — who does not plan to tighten restrictions — blames on pandemic fatigue, noncompliance with safety rules, residents' increased movement and more contagious variants.

The seven-day case average, nearly 6,000 a day, was at similar levels to nearly four months ago. The average positivity rate, 15.7%, has not been higher since almost a year ago, when many people could not get tested.

Case rates are especially inflated in the Thumb region, Macomb County near Detroit, the Gaylord area, and counties south and east of Lansing.

“I feel good. I feel relieved to be honest,” Whitmer told reporters after receiving a dose of the Pfizer vaccine from Dr. Joneigh Khaldun, the state's chief medical executive. The governor's younger daughter was vaccinated weeks ago because she has asthma.

Michigan hospitals were treating roughly 3,300 adults with confirmed infections — 85% of the fall peak — up nearly 700 from four days before and quadruple from a month ago. About half of the patients were under age 60. The death rate, 31 a day, has doubled in two weeks but is well below past peaks.

More than 36% of eligible residents had gotten at least one shot as of Sunday. About 68% of people ages 65 and up — those at increased risk of severe illness and death from COVID-19 — had received a dose.

The state health department continues to recommend that spring break travelers be tested upon their return, including at 37 special pop-up sites across the state.

Wayne State University in Detroit, meanwhile, announced a 10-day suspension of most in-person classes and spring sports due to rising infections in the city. Students who live on campus cannot have guests.

Whitmer, whom some have criticized for not aggressively tightening restrictions in this third surge like she did last spring and fall, said she talked to national public health experts who told her Michigan does not have a “policy problem."

“Taking steps back wasn't going to fix the issue,” she said. "What we have to do is really put our foot down on the pedal on vaccines and implore people to do what we know keeps us safe — masking, distancing, hand washing."