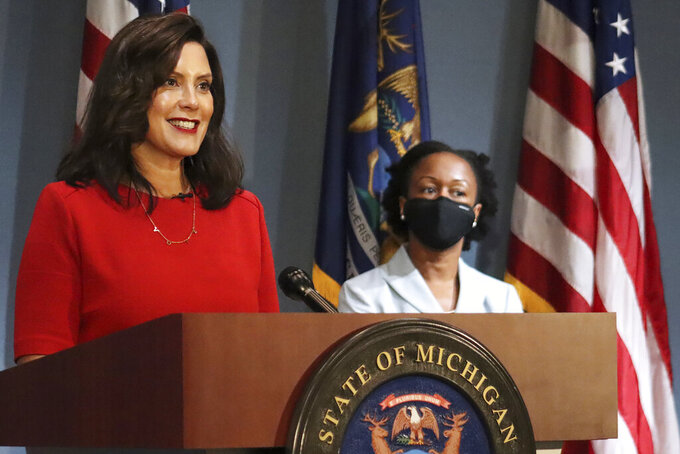 FILE - In this photo Sept. 16, 2020 file photo, provided by the Michigan Office of the Governor, Gov. Gretchen Whitmer addresses the state during a speech in Lansing, Mich. Gov. Whitmer says movie theaters and other entertainment venues can reopen after nearly seven months of closure during the coronavirus pandemic. She also has lifted a cap so more people in Michigan can attend funerals and other indoor events. The governor also issued an order Friday, Sept. 25, 2020, requiring all preK-12 students to wear masks in classrooms, beginning Oct. 5. (Michigan Office of the Governor via AP File)

LANSING, Mich. (AP) — Michigan Gov. Gretchen Whitmer said Friday that movie theaters and other venues can reopen in two weeks after nearly seven months of closure during the coronavirus pandemic, and she lifted a cap so more people can attend funerals and other indoor events.

The governor also issued an order requiring K-5 students— not just those in grades 6-12— to wear masks in classrooms outside of northern Michigan beginning Oct. 5. She also mandated that public and private schools publish information about confirmed or probable COVID-19 cases. She had previously strongly recommended face coverings for K-5 students in most regions of the state.

Whitmer revised a 10-person limit for indoor social gatherings and events in much of Michigan to allow bigger crowds in non-residential venues like banquet halls — 20 people per 1,000 square feet or 20% of fixed seating capacity, with a maximum of 500 people in the largest venues. Outdoor gatherings and events, now limited to 100 people in southern counties, can be 30 people per 1,000 square feet at a non-residential venue or 30% of seating capacity— up to 1,000 people.

Whitmer, a Democrat who has gradually reopened the economy over many months, said she took some of the most aggressive steps in the country to curb the virus in the spring, when the deadly virus hit and threatened to overwhelm Detroit-area hospitals. More than 7,000 confirmed or probable deaths have been linked to COVID-19. The state is faring better than its neighbors, enabling movie theaters and entertainment venues to reopen, she said.

Michigan’s per-capita rate of new confirmed cases in the past two weeks ranks 11th-lowest among states, according to an Associated Press analysis of data from Johns Hopkins University. The COVID Tracking Project, which the AP uses to track testing, says the state’s seven-day average positivity rate is 12th-lowest. About 2.7% of those tested are getting positive results.

“I know these business owners have made incredible sacrifices during this crisis to protect our families and frontline workers, and my administration will continue working to help them get back on their feet,” she said in a written statement. “We are not out of the woods yet, and we will continue to monitor the effects of these incremental changes.”

Whitmer had faced pressure to reopen businesses including movie theaters, which are open in all but a handful of states. Funeral homes, restricted to 10 people for indoor funerals, had said the limit was way out of step compared to other Great Lakes states.

“One of the many unfortunate side effects of the COVID-19 pandemic is that bereaved families across Michigan have not had the opportunity attend the rituals, services and ceremonies that allow them to pay their respects and process their grief over the loss of a loved one,” said Phil Douma, executive director of the Michigan Funeral Directors Association. ”Increasing the number of people able to attend a funeral is the right thing to do, and grieving families across our state can now more properly mourn their losses and honor those they love.”