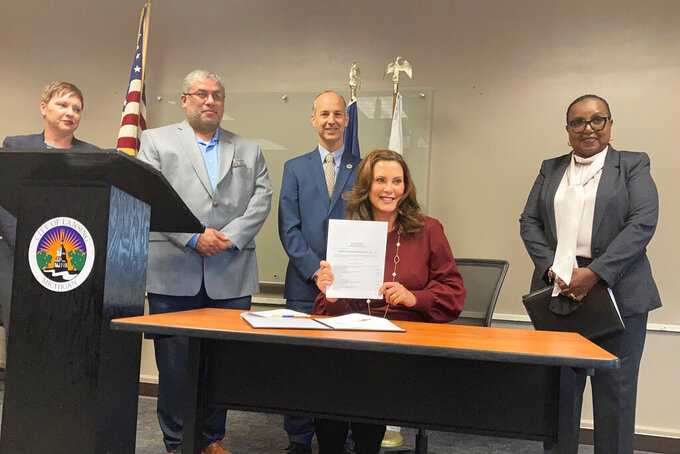 The funds are from a rescue law enacted by Congress and former President Donald Trump in December.

The Democratic governor said she was proud to sign bipartisan legislation “that will help Michiganders keep roofs over their heads and keep the ability to feed their families.”

About $1.5 billion will support the continuation of a 15% increase in monthly food benefits through September. Roughly $378 million will keep intact aid to renters at or below 80% of a local area's median income, helping with rent, utility bills and other services.

“It cannot be overstated how vital these funds have been, and continue to be, in preventing evictions during this pandemic,” Kimberly Coleman, director of Lansing's Human Relations and Community Services Department, said during the bill-signing event at the Foster Community Center.

Local governments will receive $322 million, which can be used in a variety of ways.

About $65 million in disaster funds will go to counties, cities and hospitals for coronavirus vaccination efforts and to the Midland area in the aftermath of devastating 2020 flooding.

Roughly $4.4 billion in federal aid designated for K-12 schools — including $3.4 billion from a rescue package signed by President Joe Biden in March — remains on hold. The Senate last week removed $362 million that would ensure there is at least $1,093 more per pupil for districts that stand to receive less because they have fewer low-income students. Superintendents want the money restored.

Whitmer noted that the fiscal year for school districts, unlike state government, starts July 1 — leaving superintendents and education boards unable to plan for how much additional funding they will get. She and lawmakers also are negotiating the next annual K-12 budget amid projections that the school aid fund will be $1.7 billion higher than previously estimated across two fiscal years.

“I would like to get it to my desk as soon as possible,” she said of the supplemental K-12 spending bill. She said she favors including “equity” payments as the House proposed but if it is not, “it doesn't mean it's gone forever. It just means it's not in this version."