Wholesale prices rise 0.3%, but inflation not the worry now 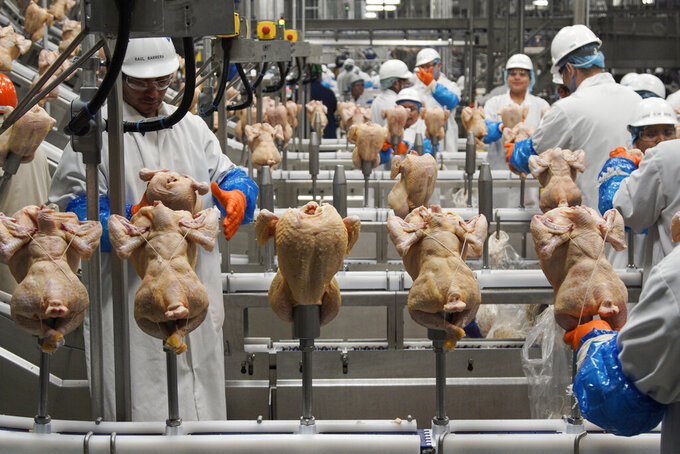 FILE - In this Dec. 12, 2019, file photo workers process chickens at the Lincoln Premium Poultry plant, Costco Wholesale's dedicated poultry supplier, in Fremont, Neb. U.S. wholesale prices rose 0.3% in August 2020, just half the July gain, as food and energy prices decline. The Labor Department said Thursday, Sept. 10 that the August advance in the producer price index — which measures inflation before it reaches consumers — followed a 0.6% surge in June which was the biggest monthly gain since October 2018. (AP Photo/Nati Harnik, File)

The Labor Department reported Friday that its producer price index, which measures inflation pressures before they reach the consumer, increased 0.3% last month, slightly lower than the 0.4% gain in September.

Food costs rose 2.4%, the biggest increase since a 5.6% surge in May that was tied to shortages caused by the pandemic.

The uptick in wholesale prices comes in the same week that government data showed retail prices did not change in October, and consumer inflation has risen just 1.2% over the past 12 months.

Over the past 12 months, wholesale prices are up just 0.5%. Core inflation at the wholesale level, which excludes volatile energy and food, is up just 1.1% over the past year.

The benign readings on inflation are a welcome sign at the Federal Reserve, which will feel comfortable staying put with ultra-low interest rates for a some time. Some economists believe the Fed won't begin raising rates until 2024.

Rather than worrying about inflation, economists say deflation could become the bigger concern as coronavirus infections surge across the United States. There have been more than 100,000 new confirmed U.S. cases reported daily for more than a week. Both California and Texas reached the grim milestone this week of a million cases of COVID-19.

Consumers have a tendency to hold off on big purchases if they see prices falling, and that can turn into a deflationary cycle.

“The risk to inflation going forward is from another round of virus outbreaks that will suppress demand,” Rubeela Farooqi, chief U.S. economist at High Frequency Economics said in a research note.