Why did ship overturn off Georgia? Hearings may give answers 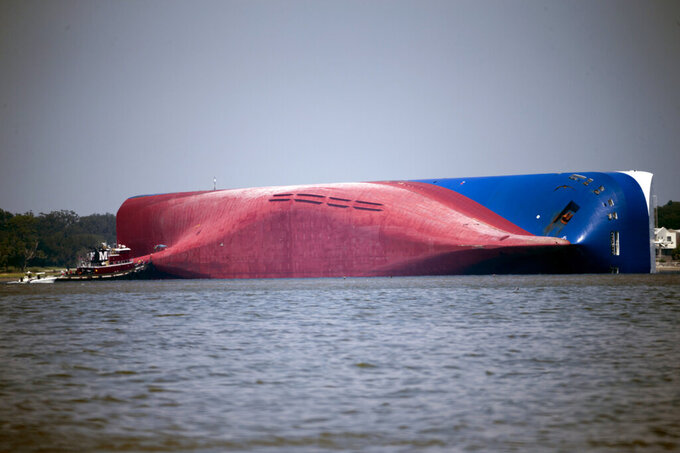 FILE - In this Sept. 9, 2019, file photo, a Moran tugboat nears the stern of the capsizing vessel Golden Ray near St. Simons Sound off the coast of Georgia. The salvage team is seeking a federal permit to surround the shipwreck with a giant mesh barrier to contain any debris when they cut the ship apart. Salvage workers coming to the Georgia coast to cut apart and remove the cargo ship that overturned will be isolated at a nearby resort to protect them from the coronavirus, officials said Tuesday, Sept. 8, 2020. (AP Photo/Stephen B. Morton, File)

SAVANNAH, Ga. (AP) — A year after a giant cargo ship carrying 4,200 automobiles overturned on the Georgia coast, public testimony from crew members and technical experts could soon provide answers to what caused the shipwreck.

The U.S. Coast Guard and the National Transportation Safety Board have scheduled hearings in Georgia starting Monday on the ill-fated South Korean ship Golden Ray. The vessel had just left the Port of Brunswick, 70 miles (112 kilometers) south of Savannah, when it capsized on Sept. 8, 2019.

The ship, measuring 656 feet (199 meters) long, remains stuck at the edge of the shipping channel off St. Simons Island, with all its cargo inside and its fuel drained, waiting to be cut into large chunks for removal. Coast Guard investigators began interviewing witnesses as soon as the ship's captain and 23 crew members were safely rescued. But no findings have been released.

Coast Guard Capt. Blake Welborn, who will serve as the lead hearing officer, declined to comment at a news conference Friday on what investigators have learned so far.

The Coast Guard has blocked out more than a week to hear testimony in the port city of Brunswick. As a precaution against coronavirus infections, the public won't be allowed to attend in person. Instead, the hearings will be streamed live online.

Welborn said the hearings will examine events aboard the ship leading up to the wreck, how the vessel's cargo was loaded at the port, navigation conditions in the shipping channel and whether the ship's owner and crew were following regulations.

Planned witnesses include the Golden Ray’s captain, the Georgia-based harbor pilot in charge of steering the ship when it capsized, and an executive of Hyundai Glovis, the shipping company that owns the vessel.

It could take another year before investigators publish a report of their findings, with recommendations aimed at improving safety.

"We really want to make sure we make the right recommendations to prevent these types of incidents in the future,” Welborn said.

Maritime experts not involved in the investigation have said vehicle carriers like the Golden Ray tend to be ungainly and bulky. Keeping them upright requires a balancing act that involves distributing the weight of a ship's cargo and fuel as well as water in its ballast tanks, which fill to add weight and help lower a vessel’s center of gravity.

So it's possible shifting cargo or some other problem upset the Golden Ray's balance, causing the ship to list and topple onto its side.

Asked Friday whether investigators had identified any stability issues, Welborn said: “There are many calculations involved in the stability of a ship. And sometimes it’s very difficult to pick those pieces apart.”

Efforts to dismantle and remove the ship, conducted separately from the investigation, have been delayed by a handful of coronavirus infections among key members of the salvage team and an active summer hurricane season.

The multi-agency command overseeing the salvage operation plans to saw the Golden Ray into eight huge chunks and load them onto barges bound for a salvage yard on the Gulf Coast. It plans to begin cutting on the vessel in early October.