Witsel returns to shoot Dortmund's winner over Zenit in CL 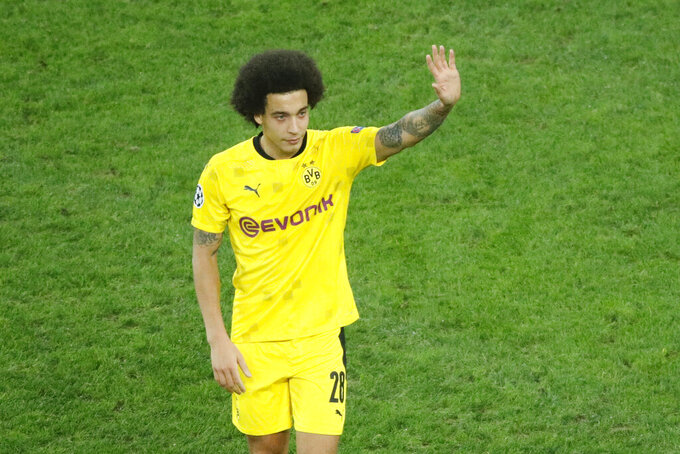 ST. PETERSBURG, Russia (AP) — Axel Witsel scored on his return to Russia to ensure Borussia Dortmund topped its Champions League group with a 2-1 win over Zenit St. Petersburg on Tuesday.

The Belgian midfielder, who played five seasons with Zenit, scored Dortmund’s winner in the 78th minute to keep the German team atop Group F, three points clear of Lazio, which held on for a 2-2 draw at home against 10-man Club Brugge.

Dortmund's Youssoufa Moukoko — just 16 years and 18 days old — became the youngest player ever to play in the Champions League when he came on in the 58th minute.

Dortmund was already assured of its place in the last 16 but needed a win to be sure of finishing ahead of Lazio, which advanced by avoiding defeat. Brugge had to settle for a Europa League place, while Zenit already knew it would finish fourth and only had pride to play for against Dortmund.

However, Sebastian Driussi opened the scoring for Zenit in the 16th minute. Aleksei Sutormin played a one-two with Malcom and pulled the ball back for his Argentine teammate to score with a deflected shot inside the right post.

The home team made it difficult for Dortmund to break through. Lucien Favre’s side looked short of ideas and prone to mistakes in buildup play. But Jude Bellingham headed over before the break before Marco Reus struck the right post.

Zenit went close after the interval when goalkeeper Marwin Hitz saved Daler Kuzyaev’s effort and reacted quickly to gather the rebound ahead of three attacking players.

Favre brought on youngsters Moukoko and Gio Reyna in the 58th.

The previous record holder for youngest player was Celestine Babayaro in 1994 for Anderlecht. Then aged 16 years, 87 days, Babayaro was sent off on his debut with a red card in a 1-1 draw with Steaua Bucharest.

Łukasz Piszczek equalized on a rebound in the 68th after Mikhail Kerzhakov saved Mats Hummels’ effort off a corner, and Witsel was left alone by the static Zenit defense to shoot inside the right post 10 minutes later.

There were more than 15,000 fans in attendance despite coronavirus infections in Russia hitting a new record on Sunday. Russia’s total of almost 2.5 million reported infections remains the fourth largest caseload in the world.