Wolf loosens restrictions in last of counties except Lebanon 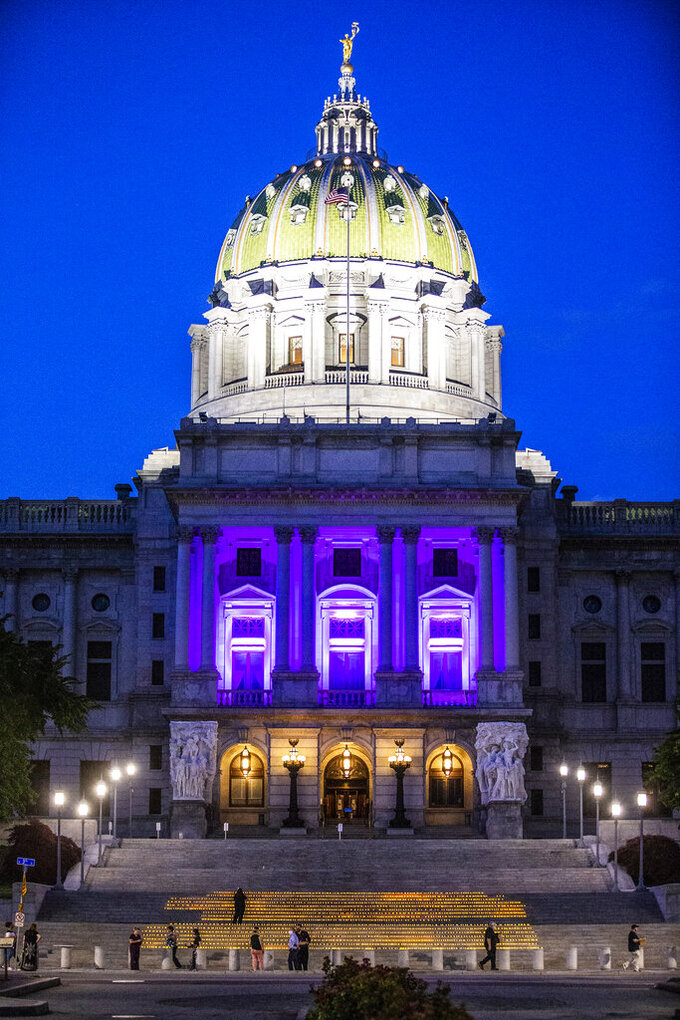 People stand by tea lights after nursing home workers and advocates lit over 3,400 of them on the steps of the state Capitol in Harrisburg, Pa., Thursday, June 18, 2020, to represent the women and men who have died of COVID-19 in Pennsylvania nursing homes. The event was part of a National Nursing Home Day of Action. (Sean Simmers/The Patriot-News via AP)

HARRISBURG, Pa. (AP) — Heavily populated regions of Pennsylvania that were among the hardest hit by the coronavirus pandemic will move next week into the "green” phase of Gov. Tom Wolf's reopening plan, meaning gyms, salons and theaters can reopen and people can gather in larger groups, his administration announced Friday.

The move leaves a single Pennsylvania county — Lebanon County, where local GOP leaders reopened early in defiance of the Democratic governor and virus cases have been rising since late May — under tighter pandemic restrictions.

The 12 counties going from yellow to green under Wolf's color-colored reopening system include Philadelphia and its collar suburbs of Montgomery, Bucks, Chester and Delaware counties.

Other counties moving to green next week will be Lehigh and Northampton in the Lehigh Valley; Erie County, where local officials have pressed for looser restrictions; Lackawanna and Susquehanna counties in the northeast; and Berks and Lancaster.

The changes will encompass the cities of Allentown, Bethlehem, Erie, Scranton, Lancaster and Reading.

Wolf, a Democrat, said local officials in Philadelphia will maintain some additional restrictions for an additional week, until July 3.

The only county left in the yellow zone is Lebanon County in central Pennsylvania. In a news release, the Wolf administration blamed Republican county officials for voting to open about a month ago.

“Lebanon County’s partisan, politically driven decision to ignore public health experts and reopen prematurely is having severe consequences for the health and safety of county residents,” Wolf's health secretary, Dr. Rachel Levine, said in the release. “Case counts have escalated and the county is not yet ready to be reopened. Lebanon County has hindered its progress by reopening too early."

The number of new infections in Lebanon County per 14-day reporting period has more than doubled since late May.

Four Republican state lawmakers from the area released an open letter to Lebanon County residents that said the decision was motivated more by politics than concerns about public health.

“They own the so-called ‘data,’ they disseminate the ‘data,’ they use this same ‘data’ to bully those who do not comply or who challenge their authority,” wrote Sen. Dave Arnold and Reps. Sue Helm, Frank Ryan and Russ Diamond.

They said Wolf “deserves only to be ignored.”

Diamond was prime sponsor of a resolution passed by both chambers earlier this month to end Wolf's shutdown. The state Supreme Court will decide whether the resolution carries any legal weight.

The May 15 decision by the GOP-controlled Lebanon County Board of Commissioners to lift restrictions on their own — without Wolf’s blessing -- sparking a political row as the governor threatened to withhold COVID-19 funding from Lebanon and other rebellious counties. Wolf has not followed through, a spokeswoman said Friday.

A message was left seeking comment from the Lebanon County commissioners.

Democratic Commissioner Jo Ellen Litz, who voted against the majority's reopening plan, called Friday a “sad day" and, in a message to county residents, urged them to wear masks and stay away from each other “religiously” for the next two weeks to give the county a chance to move to green.

“We need to work together,” she wrote.

In other coronavirus-related developments Friday:

The number of infections is thought to be far higher than the state’s confirmed case count because many people have not been tested, and studies suggest people can be infected without feeling sick. There is no data on how many people have fully recovered.

The operator of a large auto show in progress in central Pennsylvania said late Friday it had reached an agreement that resolved a legal action the Health Department launched against it to impose a 250-person limit on attendees.

A statement released by Carlisle Events said its Spring Carlisle show will continue on its final day Saturday, but an organization spokesman would not disclose how the crowd capacity issue was resolved.

The Health Department's lawyer confirmed in a court filing earlier in the day that an agreement was in the works.

The organization has argued it is more like indoor malls, amusement parks and others that are restricted to 50% of capacity under social distancing regulations imposed in response to the COVID-19 pandemic.

The event can attract some 100,000 people, although organizers say the crowd is expected to be far smaller this year.