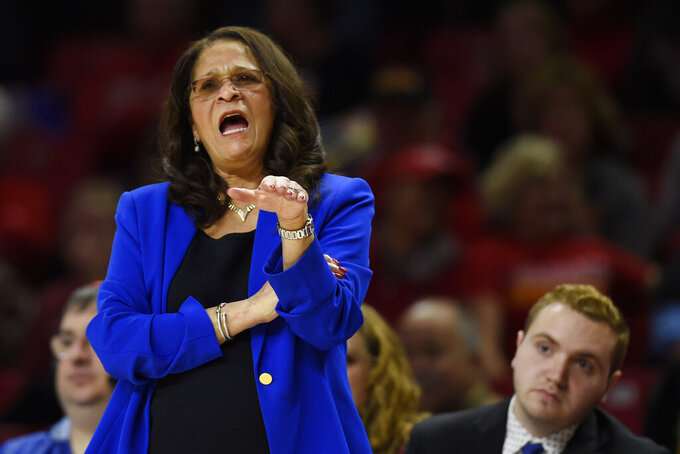 FILE - In this Dec. 31, 2018, file photo, Rutgers coach C. Vivian Stringer directs her team during the first half of an NCAA college basketball game against Maryland, in Baltimore. In the 2020-21 basketball season, Stringer will be entering her 50th season as a college coach, including the last 26th at Rutgers. The Hall of Famer will be the first NCAA women’s basketball coach ever to coach 50 seasons and just the fourth men’s or women’s basketball coach in any NCAA division to reach that milestone. (AP Photo/Gail Burton, File)

Eight months after women's college basketball was stopped because of the coronavirus, the sport is back.

Nearly 150 schools got their season started Wednesday, including No. 1 South Carolina.

Before the game against College of Charleston, 10 Gamecocks players remained seated during the national anthem to further bring attention to the movement for social justice. Only junior forward Elysa Wesolek stood during the anthem. Coach Dawn Staley and her staff also stood. Staley was proud of her players for using their voices.

“That’s what they wanted to do. they talked about it as a group outside of the coaches. we would support them no matter what they decided to do," Staley said. “I’m glad they put themselves in a position of utilizing their voices.”

South Carolina is one of the favorites to get to the Final Four, which is slated to be played in San Antonio. However, having a talented team might not be the only thing necessary to get that far. It also could very well hinge on which teams have the least disruptions because of the coronavirus.

“It felt good to get away and escape COVID for a bit and get one under our belt,” Staley said of playing Wednesday.

Flexibility, fluidity and adaptability are three words that every coach in the country has stressed for this season.

Before games even started Wednesday, dozens of teams had to pause their practices because of positive COVID-19 tests. With a positive result comes an NCAA-suggested 14-day quarantine period for entire programs.

No. 3 UConn saw its first four games wiped out Monday when the Huskies had a positive result by someone in the program. Coach Geno Auriemma said it wasn't a player or coach. It didn't matter. The team is not allowed to practice for two weeks.

That eliminated early showdowns with No. 5 Louisville and potentially sixth-ranked Mississippi State.

“Everybody is going to be in this scenario at some point,” Auriemma said. “Either already has been, is, or will be. You can just pretty much predict that.”

Before the season started, 20 games that were scheduled to be played on Wednesday were either canceled or postponed, including one for Louisville. A few more contests were postponed hours before they were set to begin.

Cardinals coach Jeff Walz didn't let that stop him from getting a game. Knowing that this would be the norm this season, Walz started a text chain with a dozen coaches so that they could schedule games at the last minute when cancellations happened.

Walz also went to social media. The result ended up being a game at Southeast Missouri State on Wednesday. The Cardinals beat the Redhawks 74-53.

“You just have to adapt and be flexible,” Walz said. “We know it's going to be pretty common this year to have games postponed late, so why not figure out a way to pick up a game a different way.”

Walz's texting group has now grown to 25 members and will keep getting bigger.

Here are a few other things to look forward to this season:

Stanford coach Tara VanDerveer and Auriemma should both pass Hall of Fame coach Pat Summitt's record win total of 1,098. VanDerveer sits three victories behind the Tennessee great after the No. 2 Cardinals beat Cal Poly. Auriemma is seven away. Predicting when either will get there is difficult because of games potentially being lost due to the virus.

“In a normal year, you’d have a better answer for it, with what’s going on right now, makes you appreciate each game,” said VanDerveer. “I don’t know what the number is; I purposely don’t think about it. I know it’s out there, reminds me what an incredible opportunity I have to work with the players I’ve worked with and the teams I have. It makes me appreciate it a little bit more.”

With so many stars lost to graduation, including four members of The Associated Press All-America first team from last spring, new players will have a chance to step into the spotlight. Kentucky's Rhyne Howard — the lone returner from the All-America team — is poised to continue breaking more records for the Wildcats. She was the nation's second-leading scorer last season.

Howard will have to wait to debut this season as she was suspended for the first two games for not upholding program standards.

There were many new coaching hires this past offseason, two though could have major impacts. Kara Lawson and Niele Ivey left NBA assistant positions to take over at Duke and Notre Dame, respectively. It is Lawson's first college coaching job, while Ivey returns to her alma mater, where she was a longtime assistant before leaving for the NBA.

Lawson said she had always wanted to coach at Duke if the opportunity presented itself.

“I knew that if it ever came open, I’d try and put my best foot forward and try to secure the position. That’s how highly I thought of the institution and the job,” she said when she was hired. “I had no idea it would happen a year after I went to Boston. It wasn’t in the plans so to speak.”

Rutgers coach C. Vivian Stringer will be entering her 50th season as a college coach, including the last 26 at Rutgers. The Hall of Famer will be the first NCAA women’s basketball coach to coach 50 seasons and just the fourth men’s or women’s basketball coach in any NCAA division to reach that milestone. She joins Phog Allen (50 seasons with Kansas, Baker, Central Missouri and Haskell from 1906-56), Jim Smith (51 seasons at Division III Saint John’s-Minnesota from 1965-2015) and Herb Magee, who is beginning his 54th season on the sidelines at Division II Jefferson (formerly Philadelphia Textile), where he took over in 1967-68.

Stringer will have to wait a few more days to get her 50th season started as Rutgers' game against Monmouth at home was postponed when a COVID-19 test came back positive for the visitors.