As world grapples with pandemic, schools are the epicenter 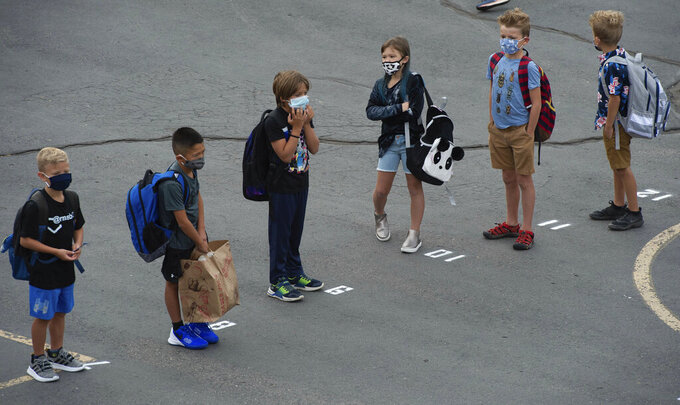 Students at Canyon View Elementary in Cottonwood Heights line up on the playground as they go back to school for the first day of classes for the Canyons School District on Monday, August 24, 2020. (Francisco Kjolseth/The Salt Lake Tribune via AP)

JACKSON, Miss. (AP) — The world is settling into a new normal for everyday life amid the coronavirus pandemic: online school classes, intermittent Zoom outages, museums that will only allow about a quarter of their usual visitors.

More than 800,000 people worldwide have perished from the virus and more than 23.5 million have contracted it, according to a tally by Johns Hopkins University — figures experts say understate the true toll due to limited testing, missed mild cases and other factors.

Older people and those with underlying health conditions appear to be the most vulnerable. However, there's uncertainty about long-term effects and what impact millions of school children around the globe returning to classrooms might have on the virus' spread.

A significant red flag emerged in Hong Kong, where scientists say they have the first evidence of someone being reinfected with the virus that causes COVID-19. The case raises alarm bells, suggesting that surviving an infection does not provide lifelong immunity.

Just in time for back-to-school, the World Health Organization has updated its guidance for mask-wearing by children, notably saying those 6 to 11 years old should wear them to fight the coronavirus, but that it depends on local factors and other criteria.

Kids under 6 years old should not wear masks, WHO says, while those over 12 should wear them just like adults should, notably in cases where physical distancing cannot be ensured and in areas of high transmission rates.

The recommendations expanded upon previous WHO guidance that children under the age of 12 were not considered as likely to spread the virus as much as adults. Children in general do face less severe symptoms than adults, with the elderly the most vulnerable to severe infection.

The popular video conferencing tool, Zoom, experienced partial outages during the first day of school for thousands of students who are relying on the technology to connect with educators.

Technical issues occurred across the U.S., with the most reports on the East Coast, as well as in Europe, according to downdetector.com, which monitors self-reported outages. The disruptions lasted about 90 minutes, according to the company.

Grade schools, high schools and universities are relying on Zoom and competing technologies like Microsoft Teams to learn remotely, and reduce the chance of infection during the pandemic.

Zoom Video Communications became a familiar tool to millions of new users after the spread of COVID-19 made face-to-face meetings risky. It now has about 300 million users.

An entire fourth grade class in Mississippi has been quarantined after a student and more than half of a school’s fourth grade teachers tested positive for coronavirus, just a few weeks after beginning the school year.

“We don’t have enough staff to cover our entire fourth grade class in-person, so we had to send everybody home, to do virtual lessons,” he said.

Museums across New York and gyms in some parts of the state outside of New York City are being allowed to reopen as coronavirus restrictions are cautiously eased.

Under guidelines announced by Gov. Andrew Cuomo, museums must keep visitors to no more than 25% occupancy and must use timed ticketing. New York City museums that will open over the next few weeks include the Metropolitan Museum of Art on Aug. 29 and the American Museum of Natural History on Sept. 9.

Cultural institutions and gyms across the state have been closed since March when nonessential businesses were forced to shut down to stop the virus' spread. New York was the epicenter of the U.S. outbreak during the spring but has so far succeeded in staving off a second wave of infections.

Scientists say they have the first evidence of someone being reinfected with the virus that causes COVID-19. Genetic tests revealed that a 33-year-old man returning to Hong Kong from a trip to Spain in mid-August had a different strain of the coronavirus than the one he’d previously been infected with in March, said Dr. Kelvin Kai-Wang To, the microbiologist who led the work.

The man had mild symptoms the first time and none the second time; his more recent infection was detected through screening and testing at the Hong Kong airport.

“It shows that some people do not have lifelong immunity” to the virus if they’ve already had it, To said. “We don’t know how many people can get reinfected. There are probably more out there.”

Millions of Mexican school children returned to classes using a system that cobbles together online classes, instruction broadcast on television and radio programming but no in-person classes as of yet.

Education Secretary Esteban Moctezuma said officials decided to rely on television because it has a far greater penetration that the internet.

A spike in coronavirus cases in Danbury, Connecticut, has led Western Connecticut State University to temporarily move all classes online and bar students from returning to residence halls for at least two weeks.

Nearly 900 students were expected to begin moving into dorms on Sunday, but school President John Clark announced the new restrictions on Saturday. About 60 students who moved in early are being told to stay on campus for the next two weeks, and commuting students must stay off campus.

Pane reported from Boise, Idaho. Associated Press journalists from around the globe contributed to this report.