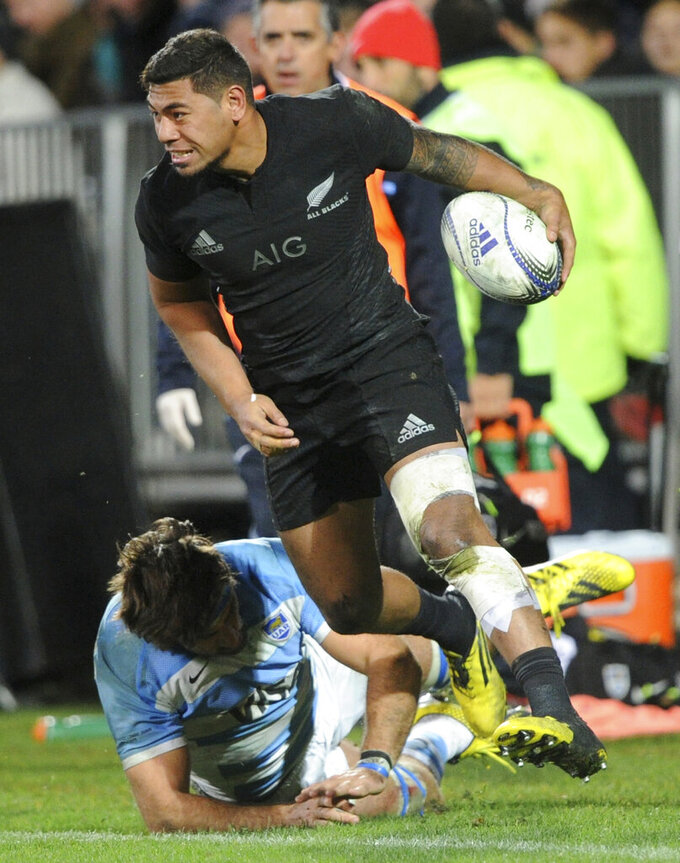 FILE - New Zealand All Blacks winger Charles Piutau runs down field during a rugby test match against Argentina in Christchurch, New Zealand, on July 17, 2015. World Rugby has relaxed its eligibility rules to allow players to switch countries as of January. The governing body made the announcement Wednesday, Nov. 24, 2021, in what it described as a “landmark" change. International players such as England's Billy and Mako Vunipola could represent Tonga, as could New Zealand's Charles Piutau, who won the last of his 17 caps in 2015, making him eligible to switch country allegiance next year. (AP Photo/SNPA, Ross Setford)

DUBLIN (AP) — World Rugby has relaxed its eligibility rules to allow national team players to switch countries as of January, the governing body announced Wednesday in what it described as a “landmark" change.

Players can change allegiances if they were born in the country they want to represent or have a parent or grandparent born there. They can switch only once and there's a stand-down period of three years from international rugby.

The “birthright amendment” was approved by the World Rugby Council and stands to benefit Pacific island countries in particular.

International players such as England's Billy and Mako Vunipola could represent Tonga, as could New Zealand's Charles Piutau, who won the last of his 17 caps for the All Blacks in 2015, making him eligible to switch allegiance next year.

World Rugby said the amendment “follows requests by emerging nations” and consultation with member unions and players about changing the rule that permanently locked a player to a country once they had played test rugby — except for specific circumstances related to the Olympics.

“Approval of this landmark regulatory change is the culmination of detailed and widespread modeling and consultation across the game,” World Rugby chairman Bill Beaumont said in the announcement.

The change recognizes “the modern professional rugby environment without compromising the integrity of the international game,” he added.

“We believe that this is the fairest way to implement progressive change that puts players first while also having the potential to support a growing, increasingly competitive international men's and women's game,” Beaumont said.

As of Jan. 1, any player meeting the criteria can make an immediate transfer application, which must be approved by World Rugby's regulations committee.

The move could prove significant for countries such as Fiji, Tonga and Samoa, among others.

“Many players across the world will now benefit from the chance to represent the country of their or their ancestors’ birth, serving as a real boost to the competitiveness of emerging nations which, in turn, will benefit the game as a whole,” Omar Hassanein, chief executive of International Rugby Players union, said in the announcement.

News of World Rugby's decision was enthusiastically received by Pacific Islands players and coaches. The coaches of Fiji, Tonga and Samoa can now potentially enlist numerous players who've previously represented Australia, New Zealand and other countries to strengthen their squads at the 2023 World Cup in France and beyond.

“First, there was disbelief that it has happened in my lifetime,” Mapusua told New Zealand news website Stuff. “And second, I think there was more relief followed by elation."

Mapusua said he soon would be able to consider calling up players such as flyhalf Josh Ioane, who played one test for New Zealand against Tonga in 2019.

Former All Blacks such as Steven Luatua, Jeff Toomaga-Allen and Lima Sopoaga already would be available Samoa.

Sopoaga, a flyhalf who played his last test for New Zealand in 2017, tweeted “lessssgooooooooooooo” and tagged former All Blacks Luatua, Charles Piutau and Ngani Laumape.

“We don’t have a lot of resources in the islands but this is one small change we can tap into,” Mapusua said. "It’s not going to mean that we’re going to win every test match but it does go a long way in terms of strengthening our team.

“The main thing is being competitive, and we had some quality players that have been sitting on the sidelines just watching for the last few years.”

Piutau played 17 tests for New Zealand before moving to Britain in 2015 aged only 24. He has gone on to become one of the highest-paid players in world rugby and is now available for Tonga.

Pacific Rugby Welfare, an organization that represents Pacific Island professional players, cheered the decision which it has long campaigned for under the hashtag #LetThemPlay.

Chief executive Daniel Leo, a former Samoa international, tweeted “World Rugby, this goes a long way to restoring many peoples’ faith in the sport and the values we hold dear.”

The rule change further enhances the strength of rugby in the Pacific, following the inclusion of Fiji Drua and Moana Pasifika in an expanded Super Rugby competition that also contains the long-established five New Zealand franchises and five Australian franchises.