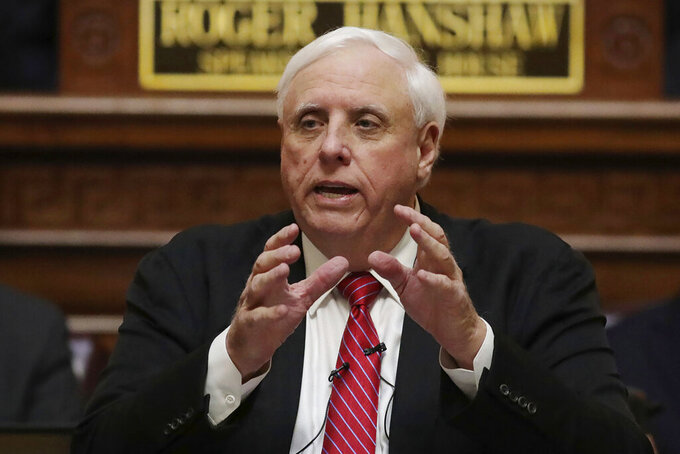 FILE - West Virginia Gov. Jim Justice delivers his annual State of the State address in the House Chambers at the state capitol in Charleston, W.Va., Wednesday, Jan. 8, 2020. Nursing home visits are being allowed again in West Virginia as the state focuses on coronavirus outbreaks in the general populations of individual counties without clamping down on areas without them. Justice warned Monday, Aug. 24, 2020, that the visits could end quickly in some places if further outbreaks occur within nursing homes themselves. (AP Photo/Chris Jackson, File)

“Please, kids, we have got to bear down here,” Justice said at a news conference. “You are absolutely running the risk of killing somebody.”

In a letter Wednesday, WVU President Gordon Gee said of the student gatherings, “To say that I am disappointed would be an understatement."

He said students must make “the right choices” in order for the Morgantown campus to remain open during the pandemic.

“This is a critical moment for West Virginia University,” Gee said.

Justice initially ordered Monongalia County bars closed on July 13 and kept extending the order until allowing them to reopen on Monday.

“Right off the get-go, boom. We’ve got people standing on top of people,” Justice said. "We’ve got no masks, servers without masks.”

According to state health statistics, 22% of all statewide positive cases are from the 20-to-29 age group, far more than any others.

As the state moves closer to the Sept. 8 opening of public schools, Justice announced that five staff members at Mingo Central High School and two at Point Pleasant Elementary had tested positive. Point Pleasant is pushing back its opening to Sept. 17.

“He hasn’t done enough to make our schools safe. This is not about politics,” Salango said.

Justice said the state has 2 million masks in its inventory, while state schools Superintendent Clayton Burch said individual county superintendents can contact the state with requests, including if they need cleaning supplies or personal protective equipment.

Despite an indoor mask mandate for public places issued July 6, daily positive cases statewide have skyrocketed since then, hitting a record 220 on Sunday.

The state announced eight more virus-related deaths Wednesday, pushing the total to at least 230. That's up 98% since Aug. 1. Most of the deaths were of senior citizens.

The virus usually results in only mild to moderate symptoms, but is particularly dangerous for the elderly and people with other health problems. West Virginia has the nation’s third-oldest population, and more than 100 virus-related deaths have been at nursing homes.