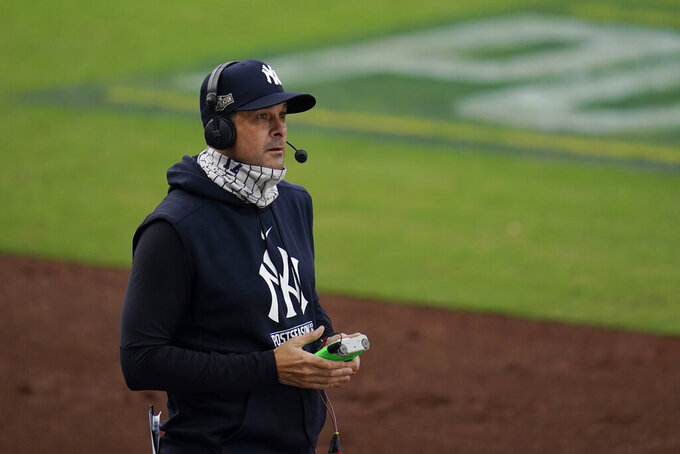 NEW YORK (AP) — Yankees manager Aaron Boone is treating DJ LeMahieu like he's any other member of the team this offseason.

And he's hopeful that when New York gathers for spring training, the reigning big league batting champion will be there.

A month and a half into baseball's offseason, LeMahieu remains a free agent. Although there's mutual interest in keeping the three-time All-Star in pinstripes, no deal has emerged.

Boone routinely participates in sales pitches for free agents — including during last year's talks with ace Gerrit Cole — but he said Tuesday he's giving LeMahieu space to make his own decision.

“This time of year, I text with guys every few weeks, check in with guys, and I’ve treated DJ in that same manner,” Boone said. “He knows I’m here if he needs to ask me anything.”

LeMahieu likes playing in New York, and the Yankees don't have a sufficient replacement in-house. Rarely are the deep-pocketed Bronx Bombers outspent on a priority piece like that.

Then again, Yankees managing partner Hal Steinbrenner has claimed New York lost more money in 2020 than any other major league franchise, spurring anxiety among fans that talks with LeMahieu are dragging because a deal may not be reached.

Boone said he isn't surprised or troubled by the timeframe on those talks.

“DJ's put himself in a really strong position, even coming off the year that was 2020 and all the uncertainty,” Boone said. “The bottom line is he's earned the right to, and I'm sure understandably has a lot of interest from a lot of different teams. I respect and understand that process.

“It’ll happen in its own time,” he added. "Hopefully that ends up with him being a Yankee.”

Sánchez worked early this offseason with hitting coach Marcus Thames and assistant hitting coach P.J. Pilittere on adjustments to his swing and approach. He's using the time with Toros to stress-test those tweaks.

Sánchez, only participating as a designated hitter, has two homers and a 1.165 OPS.

“I'm glad he's down there racking up some more at-bats,” Boone said.

Boone said he was monitoring performance for New York's other winter league players, but his chief concern is merely that they get reps. That's especially true of Germán, who missed all of 2020 while serving an 81-game suspension under Major League Baseball's domestic violence policy.

Boone said he has not spoken to Germán this offseason but revealed that he and general manager Brian Cashman had a lengthy, in-person meeting with Germán shortly after spring training was halted in March regarding their expectations for the 28-year-old right-hander.

With Masahiro Tanaka, James Paxton and J.A. Happ becoming free agents after the season, there are slots available in New York's rotation. Boone is optimistic that Germán — an 18-game winner in 2019 — will fill one.

Cashman said last week that infielder Gleyber Torres' conditioning slipped during the period when baseball shut down this spring, and that he wasn't game-ready when the season started in July. Boone agreed with that assessment but said he wasn't concerned that Torres' fitness would be an issue going forward.

“I know what he does in the offseason, which has been consistent in the last few years,” Boone said. "He’s in excellent shape right now.”

Boone is telling players to prepare for spring training to open as scheduled in mid-February, despite uncertainty around the pandemic. "I think we’re treating this as a very normal offseason," he said. ... Third baseman Gio Urshela didn't plan to have a bone chip in his right elbow removed when the season ended, even though the Yankees wanted him to have the surgery. Boone said Urshela acquiesced and had the operation this month after he felt discomfort in the elbow during offseason workouts.