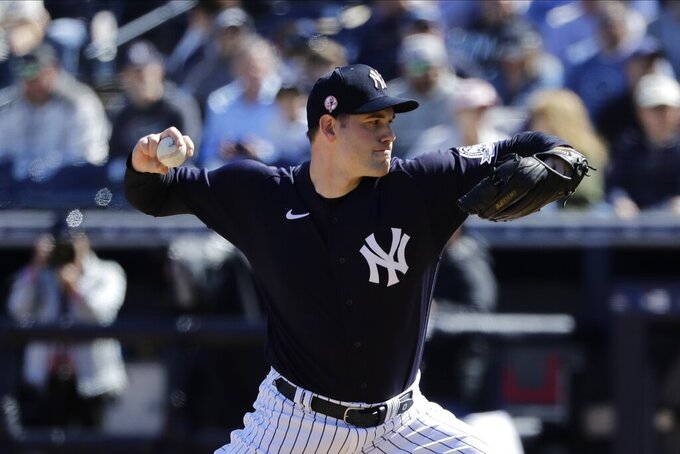 FILE - In this Feb. 29, 2020, file photo, New York Yankees' Adam Ottavino delivers a pitch during the fifth inning of a spring training baseball game against the Detroit Tigers in Tampa, Fla. The Yankees made a rare trade with the rival Boston Red Sox, sending struggling reliever Ottavino to Boston along with minor league right-hander Frank German for a player to be named or cash. (AP Photo/Frank Franklin II, File)

Boston acquired struggling reliever Adam Ottavino along with minor league right-hander Frank German from the Yankees on Monday for a player to be named or cash.

As part of the trade, the Yankees agreed to send Boston $850,000 on July 1 to cover part of the $8 million owed to Ottavino, a 35-year-old right-hander entering the final season of a $27 million, three-year contract. New York remains responsible for Ottavino’s $3 million signing bonus, due next Jan. 15.

"I know it’s the Yankees and I understand what that means and it’s the most storied rivalry in sports,” Red Sox chief baseball officer Chaim Bloom said. "But if we’re not willing to do something that helps us because it also helps them, or worse, if we’re worried that it might not go as we expect and it blows up in our faces and we looked at it, well, then, we’re just playing scared, and we're not going to play scared."

This was just the second trade since 1987 between the rivals. When New York obtained infielder Stephen Drew from Boston on 2014 for infielder/outfielder Kelly Johnson, it was the first Yankees-Red Sox trade since Boston dealt first baseman/catcher Mike Stanley to New York for pitcher Tony Armas Jr. and a player to be named, who became pitcher Jim Mecir.

"I was a little surprised today when I got the news but all things considered, Boston’s always a place I want to play," Ottavino said, speaking in front of a painting of jazz trumpeter Miles Davis, made by his mother-in-law. “I feel like I’m going to end up a trivia question now.”

A Brooklyn native who attended college in Boston at Northeastern, Ottavino signed with the Yankees before the 2019 season and took No. 0, the Yankees' last available single digit. He had a successful first season that included a 6-5 record and 1.90 ERA as he became a key setup man for closer Aroldis Chapman along with Zack Britton, Chad Green and Tommy Kahnle.

But he slumped to a 5.89 ERA during pandemic-shortened 2020, the highest of his nine full big league seasons, and manager Aaron Boone did not use him with a lead in the late innings of close games in the final week of the season or during the playoffs. Ottavino's low point was when he allowed six runs against Toronto on Sept. 7 without getting any outs.

“2020 was a tough year,” he said. “Didn't throw the way I wanted to overall and then had probably the worst game of my career right there in the middle that made it that much harder to deal with and then didn’t really get much of a chance in the playoffs. So it was tough. ... .”

“There are guys who miss a lot of bats and also walk people because a lot of what they miss bats with are pitches that are running out of the strike zone, and people swing at them.” Bloom said. “So sometimes you have to take the good with the bad, but there’s always ways on the margins to improve guys.”

“I’ve been working on some different things with my breaking balls, trying to expand some of the directions I can make the ball break,” he said. “The cutter, as good as it had been for me previous years in setting things up, it also resulted in some home runs, so too many in my opinion.”

New York wants to stay under the $210 million luxury tax payroll threshold. Ottavino figures to count as $924,956 toward the tax payroll for his discounted signing bonus rather than the $8,924,956 entire 2021 figure for his contract, and his departure cuts the Yankees’ projected tax payroll to $203 million. That includes $26 million for pending contracts with second baseman DJ LeMahieu and right-hander Corey Kluber plus $2 million for the rest of their 40-man roster and $7 million for estimated in-season moves, including replacing injured players.

New York’s bullpen already had lost Kahnle, who had Tommy John surgery in August, then became a free agent after the season and signed with the Los Angeles Dodgers.

German, 22, was 4-4 with a 3.79 ERA in 2019 in 15 starts and one relief appearance for Class A Tampa of the Florida State League. Boston had no 2020 scouting on German because minor league seasons were canceled due to the coronavirus pandemic, and the Yankees did not hold an instructional league.

“Frankly, one of the more uncomfortable aspects of a trade like this,” Bloom said. “This required a lot of legwork from a lot of different people in our organization."

“We think we just acquired someone who is really capable of pitching in any kind of late-inning situation," Bloom said. “How that shakes out as far as who closes, that’s something we’re still going to discuss.”

Boston is retooling after finishing last in the AL East at 24-36. The Red Sox have pending agreements to add free agent second baseman Enrique Hernández and right-hander Garrett Richards and to retain left-hander Martín Pérez.