Yankees: Torres out 2-3 weeks, Paxton no throw for 14 days 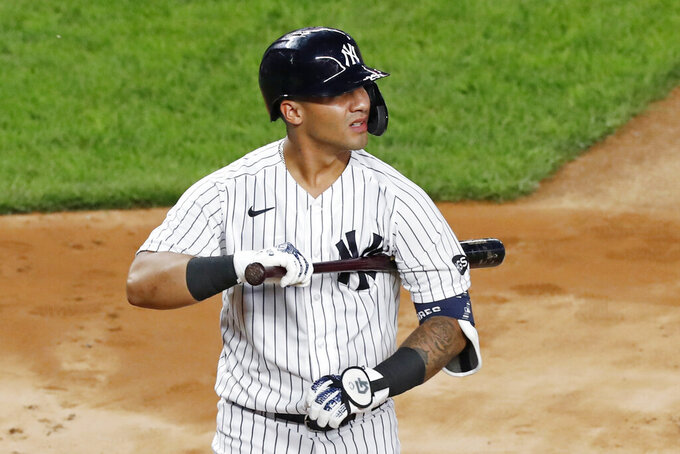 New York Yankees' Gleyber Torres reacts after he struck out looking during the second inning of the team's baseball game against the Atlanta Braves, Wednesday, Aug. 12, 2020, in New York. (AP Photo/Kathy Willens)

NEW YORK (AP) — Yankees star shortstop Gleyber Torres is expected to miss two to three weeks while recovering from strains in his hamstring and quad and pitcher James Paxton won’t throw for 14 days because of a strained left forearm.

New York manager Aaron Boone provided the updates Saturday. The team worked out at Yankee Stadium after this weekend’s Subway Series at Citi Field was postponed when two members of the Mets tested positive for the coronavirus.

Torres, Paxton and reliever Luis Avilan were put on the injured list Friday. Big-hitting Aaron Judge, Giancarlo Stanton and DJ LeMahieu already were on the IL, along with relievers Zack Britton and Tommy Kahnle and backup catcher Kyle Higashioka.

Many pitchers around the majors have gone on the IL this season, including World Series MVP Stephen Strasburg, Justin Verlander and Madison Bumgarner.

“I think it’s pretty simple,” Paxton said. “We didn’t get enough time going at a lower speed to kind of build up.”

Major League Baseball shut down spring training in mid-March because of the virus outbreak and teams held a three-week camp in July before pandemic-delayed season began.

“The tiredness is building up,” Paxton said. “We don’t have that base we normally have.”

Paxton said he hoped to rejoin the Yankees in time to get a couple of starts for the AL East leaders before the postseason begins.

Britton was among the few Yankees who managed to avoid the injury list in 2019. A player union rep, he attributes many of the medical problems around the big leagues this season to the virus-affected circumstances.

“This year's very unique,” he said. “There's just a ton of injuries throughout the game."

“That's to be expected,” he said, adding, “just due to ramping up so quickly.”

Paxton gave up three runs in five innings against Tampa Bay on Thursday and struck out eight. The 31-year-old lefty is 1-1 with a 6.64 ERA in five starts this season.

Judge was expected to be in the lineup when the Yankees are scheduled to resume play Tuesday night in Atlanta. Boone said it didn’t seem likely the Yankees and Mets would try to play a makeup Monday, a day off for both teams.