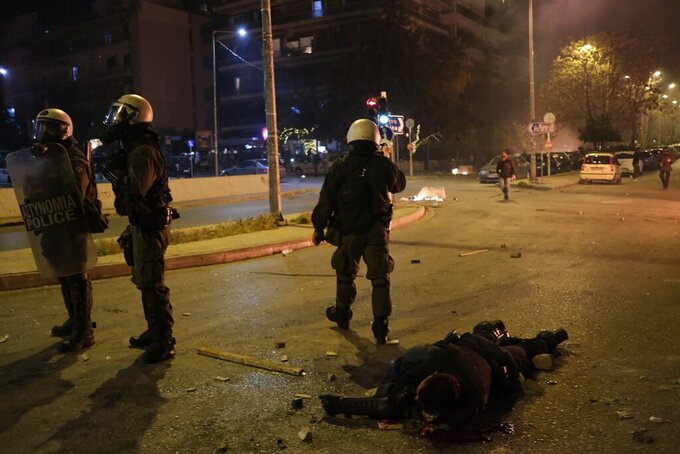 A policeman lays injured on the road after an attack by protesters during clashes in Athens, Tuesday, March 9, 2021. Severe clashes broke out Tuesday in Athens after youths protesting an incident of police violence attacked a police station with petrol bombs, and severely injured one officer. (AP Photo/Aggelos Barai)

The violence came during a march by several thousand people in the southern Nea Smyrni district. Greek media said dozens of people attacked a motorcycle police officer with stones and clubs, severely injuring him.

Earlier, police said they had confiscated quantities of petrol bombs at the beginning of the protest. They said several participants in the march were armed with iron bars.

The march to the Nea Smyrni police station was in reaction to an incident on Sunday during police enforcement of pandemic lockdown measures in a square in the Nea Smyrni area.

Video showed a police officer beating a man with a baton. Police said officers had earlier been attacked by dozens of people who objected to them trying to issue fines to people who were not obeying lockdown restrictions.

An investigation has been ordered into Sunday's incident.