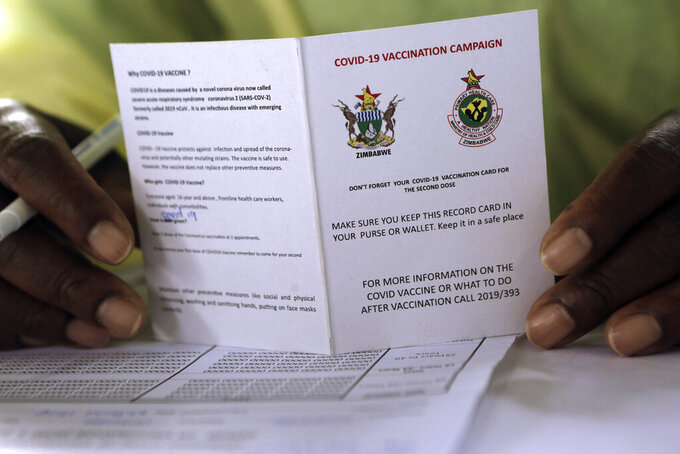 A nurse holds a vaccination card given to people who get a shot of China's Sinopharm vaccine, at local hospital in Harare, Thursday, Feb, 18, 2021 Zimbabwean Deputy President Constatino Chiwenga become the first person in the country to receive the jab, marking the first phase of the country's vaccination campaign.(AP Photo/Tsvangirayi Mukwazhi)

“I will show you,” Chiwenga said to laughter while unbuttoning his shirt.

Zimbabwe is starting its rollout with China's Sinopharm vaccine and Chiwenga said he took the first shot to “exhibit the government’s confidence" in the inoculation.

Zimbabwe received 200,000 doses of Sinopharm on Monday as a donation from China's government, joining Egypt and Equatorial Guineas as the first few African countries to get the vaccine.

Another 600,000 Sinopharm doses purchased by the Zimbabwean government are expected to arrive early next month, according to government officials. The southern African nation also expects to get other vaccines from Britain, India and Russia.

Zimbabwe aims to vaccinate 10 million of its people, which represents 60% of the country’s population and which health officials say will achieve herd immunity.

Herd immunity is when enough people have immunity, either from vaccination or a past infection, to stop the uncontrolled spread of the virus. Nobody knows what herd immunity would be for the coronavirus. Many experts say it’s 70% or higher.

Zimbabwe “has also submitted its expression of interest” to be part of an initiative by the African Union to bulk buy vaccines for the continent, Information Minister Monica Mutsvangwa said last week. The government says it has budgeted $100 million for vaccines and local businesses have also been asked to donate to the effort.

Since 2003 Zimbabwe, has looked to China, and also Russia, for assistance after falling out with Western countries that imposed sanctions in response to allegations of human rights abuses and vote-rigging under the rule of former President Robert Mugabe, who died in 2017.

Amid public mistrust of COVID-19 vaccines in the country, Chiwenga, who is also the health minister, said Zimbabwe’s health ministry had “conducted all scientific processes to ascertain the efficacy of the Sinopharm vaccine, which was confirmed to be 79%.”

Vaccination campaigns are just beginning to be launched across Africa, with jabs being given in just a handful of the continent's 54 countries. Africa has a total population of 1.3 billion people and more than 3.7 million confirmed cases of COVID-19, although that's believed to be an undercount.

South Africa, which has approximately 40% of all confirmed infections in Africa, began its vaccination campaign Wednesday using the Johnson & Johnson vaccine.

Across Africa, a massive campaign is required to vaccinate an estimated 680 million people to achieve population immunity, according to the Africa Centers for Disease Control and Prevention. Experts expect vaccines to start arriving on the continent in higher quantities later this year and next year.

Zimbabwe, like many other African countries, initially recorded low numbers of COVID-19 in the first months of the pandemic but recently experienced a spike in cases. There are fears that a new, more infectious variant of the virus came to the country when scores of thousands of Zimbabweans living in neighboring South Africa returned home for the holiday season.

Zimbabwe has reported 35,423 COVID-19 cases, including 1,418 deaths, as of Wednesday, a significant increase from just over 10,000 cases and 277 deaths at the beginning of December. The country’s once-robust public health system has deteriorated along with the economy over the past two decades.

After being vaccinated on Thursday, Chiwenga said new infections are beginning to drop “sharply.”

“The marked decline in new cases is vividly heralding the end of the second wave of the pandemic,” he said.