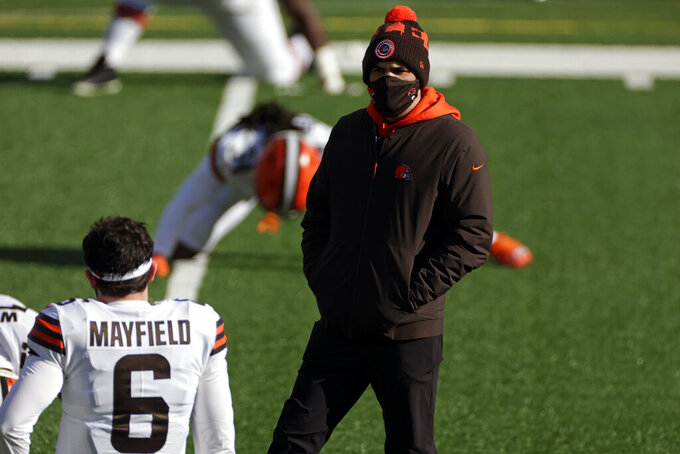 File-This Dec. 27, 2020, file photo shows Cleveland Browns head coach Kevin Stefanski talking to quarterback Baker Mayfield (60 before an NFL football game against the New York Jets, in East Rutherford, N.J. Stefanski isn't necessarily proud that he and his coaching staff have become proficient at working virtually. The Browns had their second day of remote meetings Tuesday after Cleveland's players _ along with numerous teams across the NFL _ decided to skip any in-person workouts for the time being due to the COVID-19 pandemic. (AP Photo/Adam Hunger, File)

CLEVELAND (AP) — Kevin Stefanski isn't necessarily proud that he and his coaching staff have become proficient at working virtually.

It's not been by choice.

“We've gotten a lot of reps on Zoom,” he said. "Hopefully, we are getting better.”

The Browns had their second day of remote meetings Tuesday after Cleveland's players — along with more than a dozen teams across the NFL — decided to skip any voluntary in-person workouts for the time being because of the COVID-19 pandemic.

Stefanski managed to maneuver around all kinds of obstacles in his first season with Cleveland. He led the Browns to an 11-5 record, their first playoff berth in 18 years and their first postseason win since 1994, which he watched from home after testing positive with the virus.

Now, as he begins a second season with major expectations for the Browns, Stefanski is unable to coach the way he's always known — at least up until last year. He's not complaining, at least not publicly, and Stefanski intends to keep it that way.

“As you can imagine, I respect our players,” he said. "I respect the voluntary portion of this. You also know I am a coach and I think we have really outstanding coaches here who cannot wait to get on the grass with our players.

"We will figure it out as it goes, but we are just going to make sure we are in the here and now as we go.”

Stefanski has had several conversations with Browns center and NFL Players Association president JC Tretter on the matter. Tretter has leaned heavily on statistical data, which not surprisingly shows there were less injuries last season due to players practicing less.

Stefanski made it clear he'll abide by Tretter and the other players' wishes.

“He is very transparent. I am very transparent,” Stefanski said. "This program is voluntary. Again, we are in Day 2 of Phase 1. It is a virtual program that I think the guys are doing a nice job with. We will deal with anything else that comes down the road, but I am just going to make sure that the communication continues between JC and really any of the players and myself.”

Last week, the league sent a memo to teams announcing that the first four weeks of the voluntary program will be virtual before transitioning to in-person work at the teams’ facilities. Last year, everything was virtual and training camp was delayed by the pandemic.

Williams (shoulder nerve) and Delpit (ruptured Achilles tendon) both missed last season and their losses depleted a secondary that had other issues. Beckham tore a knee ligament at Cincinnati in Week 7, underwent surgery and missed the remainder of the season.

“He’s trending in the right direction,” Stefanski said of Beckham. “Really, Odell and Grant Delpit and Greedy, I think they’re all on track. I don’t know the exact date that that is for all those guys but I really like how they’re progressing.”

Williams got hurt in training camp and seemed on the verge of returning several times but never made it back.

"I’m just so happy for the kid,” Stefanski said. “He just battled his butt off in the rehab room for months and had a great attitude throughout. I’m just really, really happy for him as he keeps getting better and better. He’s got a ways to go but he’s trending in the right direction.”

NOTES: Last week's surprising release of defensive tackle Sheldon Richardson saved the Browns some money, but also weakened their line. Stefanski didn't rule out the possibility Richardson could return, but it seemed like a longshot. “I hope there is a scenario," Stefanski said. "But those are the hard decisions that are made. I really want to point out that Sheldon was such a big part of what we did last year.”