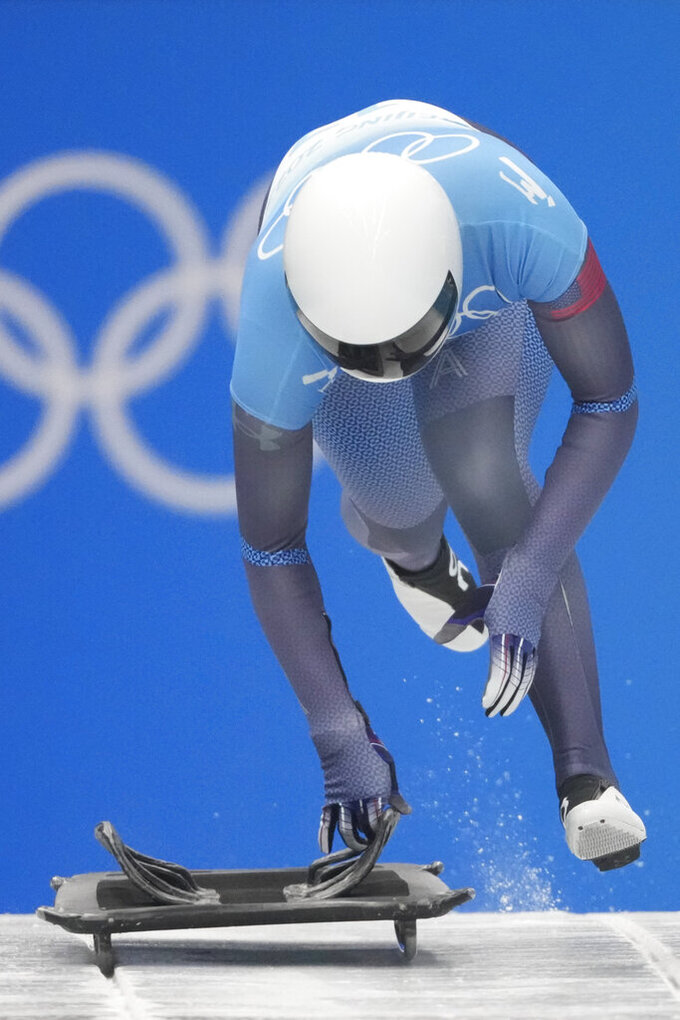 Kelly Curtis, of United States, slides during the women's skeleton run 3 at the 2022 Winter Olympics, Saturday, Feb. 12, 2022, in the Yanqing district of Beijing. (AP Photo/Dmitri Lovetsky)

And in her first Olympic appearance, she became a trailblazer.

Curtis finished 21st in the women’s skeleton event, her run at the Beijing Games ending Saturday. The result isn’t why she’ll be remembered. Curtis was the first Black athlete to represent USA Skeleton at the Winter Olympics — and she hopes her presence at the Games will open more doors to her sport.

“It’s pretty important. It’s part of my identity, but it’s not the only thing that I lean on,” Curtis said. “I would like to be known as one of the best sliders. It’s nice with a cherry on top to be known as the first Black Olympian for USA Skeleton, but I would also like to be one of the best. So that that’s really what I’m trying to progress toward every time I go out there and slide.”

There are plenty of fascinating elements to Curtis’ story. She has an intense dislike for cold weather, which isn’t a great thing for someone who competes in a sport where she slides at 80 mph with only a thin sled separating her body from an icy chute. She had six wisdom teeth. She once tried to jump over a fence and broke both her arms. She needed a miracle finish just to qualify for this year's Olympics.

In Beijing, though, most of the questions she’s fielding are about race.

“Whether I wanted it or not, we’re here now,” Curtis said. “I think there’ll be a lot more questions just because of my skin tone regarding that. And I didn’t expect to be in this position right now. But I’m just trying to embrace it all. ... This is the space I’ve always been in. It’s just more people are taking notice.”

Curtis is no accidental success. She was a big-time heptathlete at Division III’s Springfield College, a winner of that event at the 2011 Penn Relays and a three-time All-American at the same school that produced 2010 U.S. Olympic women’s bobsled medalist Erin Pac.

Her father, longtime and now retired athletic administrator John Curtis, was drafted by the New York Jets in 1971. A family road trip to Atlanta in 1996, after the city played host to that summer’s Olympics, opened her eyes to the Games. (“I still remember Izzy the mascot,” she said.)

“I’ve been very blessed to be able to be in a family that has put athletics in such a high regard and understands that it’s a vehicle that can bring us to places that we never thought would be possible,” Curtis said. “I’ve always been known as John Curtis’ daughter, and now that I’m on Team USA he’s starting to be known as Kelly Curtis’ father. I like that.”

She was one of three women of color in the skeleton competition at the Beijing Games. The others: Valentina Margaglio of Italy, and Brogan Crowley of Britain.

They echo Curtis’ sentiment on race within their sport: Being on the Olympic stage is perhaps the best way for skeleton to grow.

“I’m really proud. I’m really proud,” Crowley said. “I know it’s different. I don’t really see it as different. But when people ask me the question, I guess I reflect a little bit. I am proud and I hope to inspire kind of a new generation of younger children and just make them believe that they can do whatever they want to. Really, there should be no restraints on what you think you can do.”

Curtis looks at it the same way. She knows skeleton doesn’t get talked about much, and certainly even less in non-Olympic years.

And if anyone heard her story this week and drew inspiration from it, that’s what Curtis would call a win.

“I’m standing on the shoulders of giants,” Curtis said, “trying to inspire the next generation.”