Even with no fans, penalty pressure causes best to miss 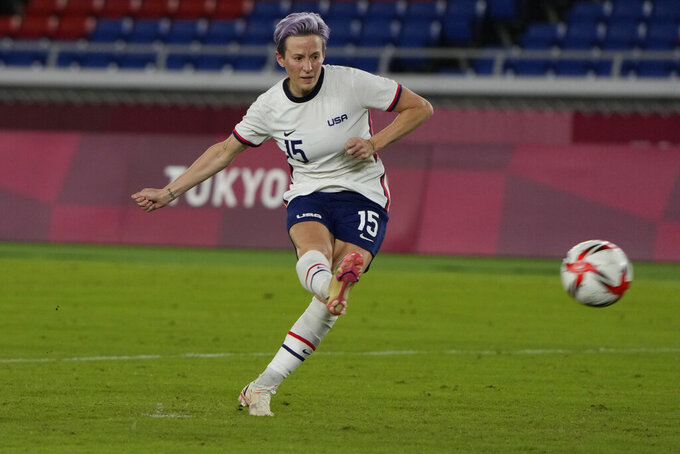 TOKYO (AP) — Just what is it about penalties that even the most prolific of scorers, like Netherlands striker Vivianne Miedema, cannot get the ball in the net?

A blunt expletive was her agonizing initial response through the raw pain minutes after the Olympic quarterfinal shootout loss to the United States on Friday.

“I’m just gutted to be honest,” Miedema said, gathering her thoughts despite having scored 10 goals in this year's Olympic soccer tournament. “It doesn’t help me whatsoever. It doesn’t help the team. We’re out."

The soul-searching was less about the penalty saved in the shootout. It was the one blocked during regulation time by goalkeeper Alyssa Naeher. Why didn't Miedema, the top scorer at the Olympics, take it? Instead, penalty duties were deferred to Lieke Martens.

“I should have taken the penalty in the game,” Miedema said. “I should have just stuck with my plan and go from there. But it’s life. It’s football and I just need to move on.”

The Americans know all about losing on penalties after being knocked out of the 2016 Olympics by Sweden after losing the 2011 Women's World Cup final to Japan in a shootout.

“It’s such a cruel way to end a game," U.S. captain Megan Rapinoe said. “It sucks to miss one. It sucks to be on the losing end of that."

This time the Americans weren't on the losing end because Rapinoe converted the deciding penalty to seal the 4-2 shootout win against the Dutch and set up a semifinal meeting with Canada in Kashima on Monday.

“No way, give my secrets away?” Rapinoe joked when asked about her strategy. “No, I just try to be calm. I always say to myself, ‘The worst that’s going to happen is you’re going to lose the whole thing.’”

Coolness when it mattered most from the star who started the game on the bench.

“I just tried to go out there," she said, “do my routine and be confident."

Rapine was put in position to win the game by Naeher, who made the decisive save on Martens' attempt during the game, then added two more stops in the shootout.

“You just try to stay in the moment," Naeher said. “Focus on the ball. Take a couple of deep breaths and just let instincts take over.”

Penalties were an early addition to the rules of soccer, coming in 1891 to penalize penalty-area offenses after a proposal by Northern Irish goalkeeper William McCrum. It wasn't until 1970 that the concept of a penalty shootout was adopted to determine the winner after a draw, replacing the system of drawing lots.

The shootout has largely been left intact for the last six decades, aside from an abandoned trial of mixing up the order of penalties four years ago. But a revival of 35-yard breakaway penalty shootouts, as used in the late 1990s in American soccer, has often been mooted to end the intensity of the current face-off.

What has transformed the environment for shootouts over the last year has been playing games in empty stadiums because of the coronavirus pandemic. So one thing Miedema didn't have to contend with, before stepping up and having her penalty saved, was any raucous crowd in Yokohama.

“It takes a little pressure off not having all the fans," said Rose Lavelle, who scored the first American penalty after Miedema's miss. “But it was a little weird. I think we’ve obviously practiced for those moments and everybody was really big stepping up. Alyssa’s incredible and came up with some amazing saves.”

With the game being played in Rifu — about 400 kilometers (250 miles) from Tokyo and it's state of emergency — a small crowd was allowed. The Canadians felt lifted by the presence of flag-waving fans on their side.

"That little bit of energy can help push the team over the top,” Labbe said.

Rapinoe said she would much prefer to make penalty kicks in front of a packed venue, rather than Yokohama's 70,000 empty seats.

“It’s way more fun. The entertainment value decreases immensely when it’s just the camera people behind us,” she said. “So it’s definitely not as much fun, but it kind of is what it is.”