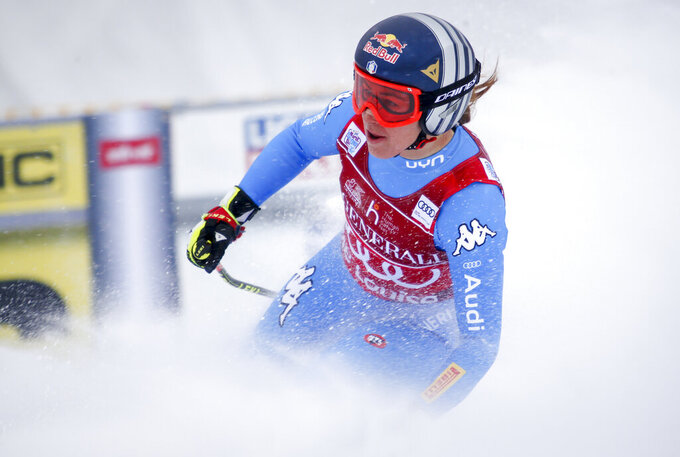 LAKE LOUISE, Alberta (AP) — Sofia Goggia won a World Cup downhill by a wide margin for the second consecutive day Saturday, extending her streak in the discipline to six appearances in a row as she shapes up as a big favorite to defend her Olympic gold medal in Beijing in two months.

Goggia, a 29-year-old Italian, again was terrific in Lake Louise, covering the course in 1 minute, 48.42 seconds to become the first woman since Lindsey Vonn in 2009-10 to put together a run of a half-dozen triumphs in the downhill.

Breezy Johnson of the U.S. was the runner-up, just like she was on Friday, this time trailing Goggia by 0.84 seconds. These are Johnson's first two second-place World Cup finishes; the 25-year-old from Wyoming came in third for four straight downhills last season.

Reigning downhill world champion Corinne Suter of Switzerland was third Saturday, 0.98 seconds off Goggia's pace. She and Johnson were the only two women within a second of Goggia, who was nearly 1 1/2 seconds faster than the field on Friday.

She was the 31st racer out of the start gate in both downhills at Lake Louise, the site of her first World Cup win in the event in 2017.

Goggia earned the crystal globe as the World Cup leader in the downhill by claiming the last four she entered before a right knee injury in January cut short her season and knocked her out of the world championships.

She won the title at the Pyeongchang Olympics in 2018, when 2010 downhill champion Vonn took the bronze.

At the Beijing Games, which open on Feb. 4, Goggia can try to become the first woman to go home with consecutive Olympic downhill golds since Katja Seizinger did it in Lillehammer in 1994 and Nagano in 1998.

The World Cup stop in Lake Louise closes with a super-G on Sunday.